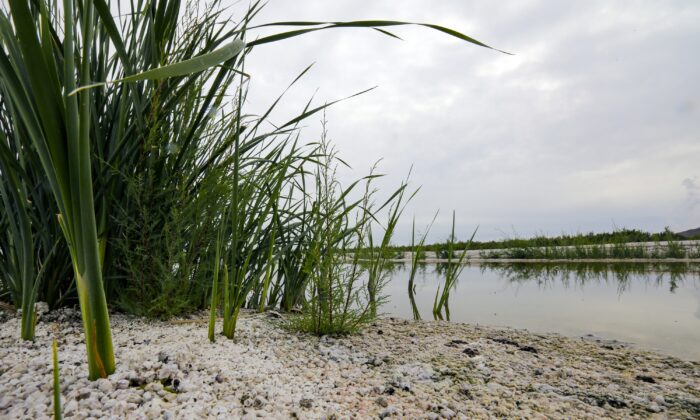 Grasses and cattails are sprouting up on exposed lake bed in the Salton Sea, Calif., on Sept. 9, 2019. (Irfan Khan/Los Angeles Times/TNS)
Environment

Can Lithium Cure What Ails the Salton Sea?

SALTON SEA, Calif.—Studying the complexity of mud on the ocean floor is a life’s work for Timothy Lyons, so when the tall and lean biogeochemist asks you to join an expedition in search of chemical mysteries buried deep beneath the waves, be prepared to get wet and dirty.

On a recent foray onto California’s largest and most troubled lake, Lyons rode a Zodiac skiff with a 15-horsepower engine across the Salton Sea against a backdrop of desolate mountains, dunes and miles of shoreline bristling with the bones of thousands of dead fish and birds.

As he approached the center of the lake with a clutch of passengers including two members of his laboratory at the University of California, Riverside, Lyons said, “Cut the engine. Let’s grab some mud.”

Moments later, Caroline Hung, 24, and Charles Diamond, 36, dropped a coring device over the side, then hauled up a sample of sediment that was gray on the bottom, dark brown on top, and as gooey as peanut butter.

“The big problem at the Salton Sea is intermingled with that organic brown layer on top—and to be honest, it’s scary,” said Lyons, 63. “It’s loaded with pesticides and heavy metals—molybdenum, cadmium and selenium—that linger in greatest concentrations in deeper water.”

“That should worry people, because the Salton Sea is shrinking and exposing more and more of this stuff to scouring winds that carry them far and wide,” he added. “Our goals include mapping where these hazardous materials are located, and determining where they came from and what may become of them if trends continue.”

For Lyons’ research team, filling blanks in existing data is an obsession, and it could have significant implications at a time when the air practically crackles with a volatile mix of environmental danger and economic opportunities promised by ongoing efforts to tap immense reserves of lithium, a key ingredient of rechargeable batteries.

Delays and costs are mounting for many projects that were designed to be showcases of restoration and dust mitigation. Scientists say it’s because the projects were developed without consideration for heat waves, severe droughts and water cutbacks due to climate change, or for the constantly evolving underlying geology at the hyper-saline landlocked lake at the southern end of the San Andreas Fault, where shifting tectonic plates bring molten material and hot geothermal brine closer to Earth’s surface.

Now, large corporations investing in proposals to suck lithium out of the brine produced by local geothermal operations have revived hopes of jobs and revenue from land leases, with lithium recovery projects potentially supporting internships, education programs, and environmental restoration projects for years to come.

The big question during a recent meeting sponsored by the Lithium Valley Commission, a group of lawmakers and community leaders organized to help guide decisions that could affect low-income communities surrounding the Salton Sea, was this: What’s in it for us?

“The lithium rush at the Salton Sea cannot be stopped,” said Frank Ruiz, Audubon California’s program director for the lake and a member of the lithium commission. Communities surrounding the Salton Sea, he said, “see that as a victory—a ticket to a better life.”

“If done correctly,” he said, “it will elevate the region by creating jobs, benefit the state and the nation by making geothermal energy more affordable, and lay the groundwork for negotiations aimed at ensuring that some of the royalties from lithium production and related land leases are used to support dust reduction and environmental restoration projects.”

Jonathan Weisgall, a spokesman for Berkshire Hathaway Energy, which was recently awarded a $6-million California Energy Commission grant for a demonstration project at a geothermal facility in the nearby community of Calipatria, agreed, but stopped short of guarantees.

“My passion is workforce development and economic opportunities in the clean energy sector,” Weisgall said. “We don’t want to bring in a workforce from outside Imperial County if we don’t have to.”

The Salton Sea was created in 1905 when the Colorado River broke through a silt-laden canal and roared unimpeded for two years into a basin near Brawley then known as the Salton Sink.

Fishermen flocked to its barnacle-covered shores to catch corvina, croaker and sargo. Birds flocked to its wetlands, turning it into one of the most important stops along the Pacific Flyway for species including 90 percent of the migration’s white pelicans.

But the Salton Sea is a non-draining body of water—which is what makes it technically a sea and not a lake—with no ability to cleanse itself. Trapped in its waters are salt and selenium-laden agricultural runoff as well as heavy metals deposited over the last 116 years, authorities say.

Some scientists believed that 2018 would be the start of a profound environmental, public health, and economic disaster for California.

The change was predicted in 2003 when the state Legislature promised to slow the shrinking of the lake as part of a successful effort to persuade the Imperial Irrigation District to sell some of its water to San Diego. Under the agreement, the district stopped sending fresh water into the lake on Dec. 31, 2017.

The Salton’s high salinity has made it inhospitable to tilapia, a primary food source for migrating birds; the fish has all but stopped reproducing. Visiting bird populations are a small fraction of what they once were.

The only fish in the Salton Sea today are inch-long desert pupfish and hybrid tilapia. Scientists say even these will survive only near the mouths of rivers and canals once the salinity level reaches 70 parts per thousand, which is expected within the next few years.

A study by the U.S. Bureau of Reclamation concluded that doing nothing to keep the Salton Sea viable could end up requiring nearly $10 billion in mitigation projects.

Critics point to the U.S. Fish and Wildlife Service’s Red Hill Bay project on the Salton Sea as an example of what has not been accomplished. The restoration program was designed to create more than 500 acres of shallow marine habitat for migratory shorebirds at the sea’s southern end in Imperial County, using water from a nearby river and a 183,000-pound steel barge equipped with pumps anchored a mile offshore.

Six years of delays have added costs to the project’s original $5.3-million budget. But it may never cross the finish line because of a series of unforeseen problems that have cropped up as the Salton Sea recedes and the flows of its tributaries decline. For example, the Alamo River is no longer considered a source of water for the project because its flows have fallen below an inlet that was designed to guide water into the proposed marine habitat.

As of November, the Fish and Wildlife Service has spent roughly $1 million in grants and budget allocations on the project, federal officials said. A $3.3-million grant awarded by the California Wildlife Conservation Board to help complete the work requires that the Fish and Wildlife Service secure a 25-year lease agreement with the Imperial Irrigation District by Dec. 31, said Pam Bierce, a spokeswoman for the federal agency.

On top of that, a year ago the Imperial County Air Pollution Control District slapped the irrigation district, which owns the property, with an order to deal with dust emanating from the work site. The irrigation district responded with surface-roughening techniques that reduced dust by 90 percent.

“The Red Hill Bay project was a solution to a problem that existed 15 years ago,” said Tina Shields, water department manager at the irrigation district. “The design doesn’t work anymore because it is a dynamic place and conditions have changed.”

Beyond that, CalEnergy Resources Ltd., a subsidiary of Berkshire Hathaway Energy, has a preexisting lease for the entire surface area of the project.

In a recent response to questions from Rep. Raul Ruiz (D-Calif.), the irrigation district said it “will work with CalEnergy to incorporate their plans for geothermal energy and lithium development on a commercial scale for the benefit of the local community and the rest of California.”

The Salton Sea remains an environmental war zone like no other. Lyons’ team aims to collect information that can help stakeholders make the best decisions moving forward.

His team members’ recent venture into the Salton Sea got off to a wobbly start when they gathered in bulging life vests at one of the few remaining places where a boat can be put into the water: a remote stretch of ankle-deep shallows and ooze.

After several minutes of pushing and pulling their little skiff into deeper water, they climbed aboard and set out on tea-colored water as smooth as glass. Their goal was 30 feet below the surface.

“It is an exciting time to be investigating the contents of the mud we’re pulling up out of the water,” Hung said. “In it are pieces of information that could help bring environmental justice to local communities.”