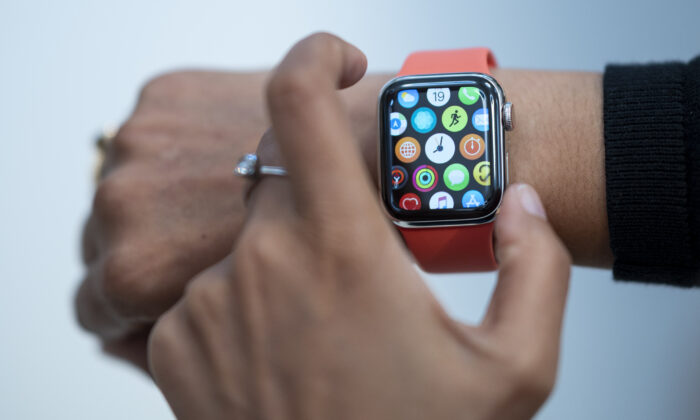 An employee demonstrate the new Apple watch inside the newly renovated Apple Store at Fifth Avenue in New York, on Sept. 19, 2019. (Johannes Eisele/AFP via Getty Images)
US News

A visitor to a Walt Disney Co. theme park has said she lost $40,000 in credit card fraud after losing a wearable made by Apple Inc..

The visitor lost her Hermes edition Apple Watch while enjoying a ride at the Disney-operated EPCOT theme park at the Walt Disney World Resort in Florida, reported Apple Insider.

The watch reportedly fell through the grated floor of the ride while it was at an elevation and could not be recovered despite her reporting the incident to the staff.

The visitor later reportedly said she started receiving fraud alerts for her credit card, adding that several credit cards were loaded onto her lost Apple Watch, totaling $40,000 in charges.

She also reported this to the Orange County Sheriff’s Office on April 14, as per Apple Insider.

The report said that while it was plausible the credit card charges could have been added, it was less likely that the Apple Watch was behind it as the device automatically locks after being removed from a user’s wrist.

Apple Insider allowed the probability that the watch PIN code was an “easily guessed number.”

Weak passwords are not only a risk for credit card users but also pose a threat for cryptocurrency holders using Apple devices.