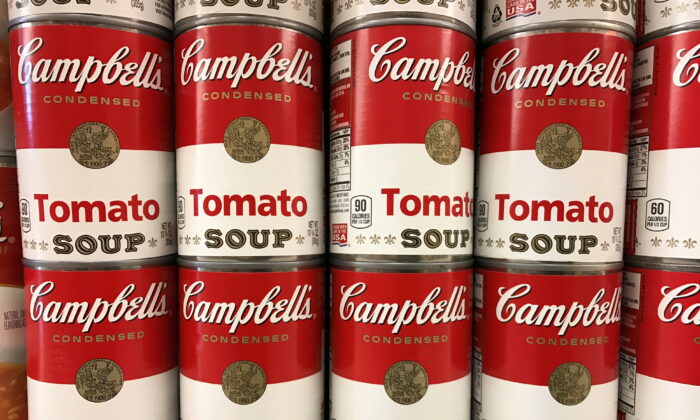 Tins of Campbell's Tomato Soup are seen on a supermarket shelf in Seattle, Washington, on Feb. 10, 2017. (Chris Helgren/Reuters)
Companies

Campbell Soup said on Wednesday it was planning to increase prices of some products, as it deals with higher ingredient and freight costs that are likely to plague packaged foods makers through the year.

Shares in the Cape Cod potato chips maker, which already raised prices for some items only last month, gained 2 percent as it also announced a $500 million share repurchase plan.

Packaged foods makers have been raising prices of their products in recent months as they wrestle with labor shortages and higher costs of wheat, corn, and edible oils.

Campbell expects to realize mid-single-digit price growth in fiscal 2022. It plans to selectively push prices up to deal with potential jumps in raw material costs, including steel.

Steel is used in packaging its soups, demand for which has been steady due to repeat orders from consumers. Campbell now looks to keep up the sales level by modernizing packaging and launching new items.

“Part of the composition of the year is going to be a little bit of a tale of two halves,” Chief Executive Officer Mark Clouse told analysts, noting an expected improvement in sales in the second half.

“With COVID resurgence, I think some of the consumer dynamics that supported demand is likely going to be with us for a while longer.”

However, Campbell expects fiscal 2022 organic net sales in a range of 1 percent decline to a rise of 1 percent. The maker of Prego pasta sauces also forecast adjusted earnings between $2.75 and $2.85 per share, below Refinitiv IBES estimates of $2.87.

“Question will remain on margin progression through the year given creeping costs and uncertainty around price vs. volume dynamic,” Jefferies analysts wrote in a note.