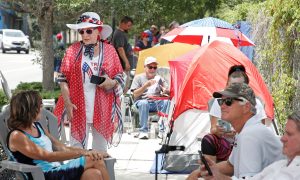 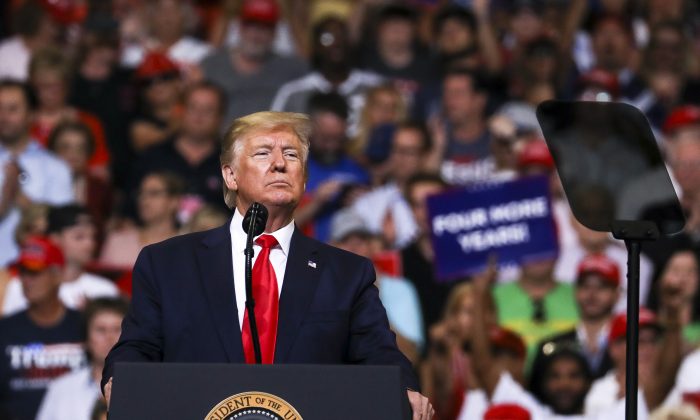 Campaign Manager Predicts Trump Will Win 2020 in an ‘Electoral Landslide’

President Donald Trump’s 2020 campaign manager is predicting the president will win re-election in a landslide.

Brad Parscale., widely credited as one of the main forces behind Trump’s stunning 2016 win, said just before the president’s campaign kickoff on June 18 that he believes the campaign will win Florida again.

While outlets like CBS promote polls showing Trump behind virtually every top Democratic contender, including former vice president Joe Biden, Parscale argued that the polls rely on shaky methodology that was exposed last election when nearly every outlet considered mainstream had Hillary Clinton beating Trump up until the election.

“I just think the country is too complex now just to call a couple hundred people and ask them what they think,” Parscale said. “There are so many ways and different people that are gonna show up to vote now. The way turnout works now. The abilities we have now to turn out voters. The polling can’t understand that. And that’s why it was so wrong in 2016. It was 100 percent wrong. Nobody got it right—not one public poll. The reason why is it’s not 1962 anymore.”

Parscale said Trump’s support stems in part from his efforts to stem the flood of illegal immigrants flowing across the southern border.

“The president has always been about securing the southern border,” Parscale said. “It’s why he won the victory in 2016.”

The prognosis on Trump’s prospects was bolstered by Ronna McDaniel, the GOP chairwoman, who announced the morning after Tuesday’s rally that Trump raised $24.8 million in less than 24 hours.

@realDonaldTrump has raised a record breaking $24.8M in less than 24 hours for his re-election. The enthusiasm across the country for this President is unmatched and unlike anything we’ve ever seen! #trump2020 #KeepAmericaGreat

“The enthusiasm across the country for this President is unmatched and unlike anything we’ve ever seen!” she added.

Some 20,000 people fit into the Amway Center in Orlando for the rally, with thousands of others watching on big screens outside.

Trump championed the strong economy, his foreign policy efforts, and the recent finding by special counsel Robert Mueller that there wasn’t conspiracy or collusion between his campaign and Russia, a theory that was promulgated by Trump’s political opponents and a slew of media outlets.

Trump’s rally wasn’t broadcast by MSNBC, which has openly opposed him for years. The other main leftwing outlet, CNN, started broadcasting the rally but cut away after about six minutes after the crowd began chanting “CNN Sucks.”

“The fact is the American dream is back and bigger and better and stronger than ever before. As long as you keep this team in place, we have a tremendous way to go. Our future has never ever looked brighter or sharper,” Trump told the crowd of supporters, reported the openly conservative Breitbart website. He said that 2020 would be a “defining moment in American history” before pointing at the members of the media in the stadium.

“Ask them right there,” he said.

The crowd then started the chant, prompting CNN to cut away from the live broadcast of Trump’s remarks to a studio.

“All right. We’ve been watching the president kick off his reelection bid. He’s been on stage for about six minutes. Within two minutes he did talk about the economy, but within four minutes it was attacks on the media,” CNN’s John Berman told viewers.