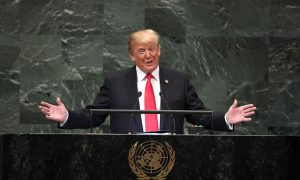 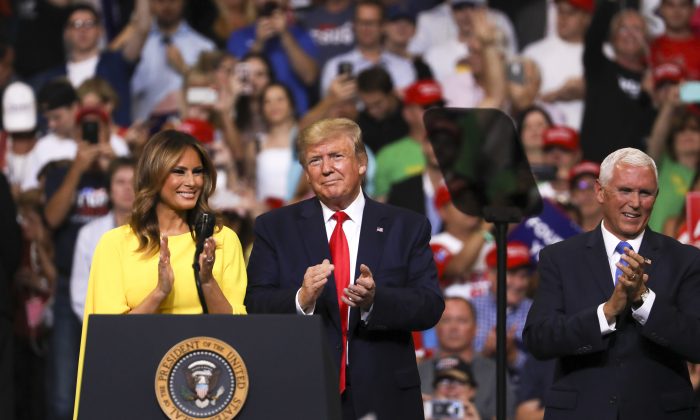 President Donald Trump officially launched his 2020 presidential reelection bid on June 18 in Orlando, Florida. During the launch, President Trump celebrated his accomplishments since being elected and called on Americans to reelect him to continue the momentum of the past two years.

More than 120,000 ticket requests poured in for the 20,000-seat Amway Center. The campaign transformed the overflow area outside the center into a day-long party with food trucks, live music, and jumbo screens.

In Photos: Trump Kicks Off 2020 Campaign in Orlando

“Our country is now thriving, prospering, and booming. And frankly, it is soaring to incredible new heights. Our economy is the envy of the world,” Trump said. “Our future has never ever looked brighter or sharper. The fact is, the American dream is back, it’s bigger and better, and stronger than ever before.”

Attendees lined up as much as 40 hours early to make it into the arena. The official rally kicked off with speeches from Trump’s family members, key campaign officials, and Vice President Mike Pence.

In speeches leading up to the June 18 launch, Trump positioned the 2020 election as a choice between socialism and freedom.

“A vote for any Democrat in 2020 is a vote for the rise of radical socialism and the destruction of the American dream,” he said.

Pence picked up the theme in his speech before introducing Trump.

Trump spoke fondly of his 2016 presidential run, calling it “a defining moment in American history.”

“2016 was not merely another four-year election. This was a defining moment in American history,” he said. “This was our chance to reclaim our government from a permanent political class that enriched itself at your expense.”

Trump said that his inauguration in January 2017 marked a transfer of power back to Americans. And he said that, in the years since, he had fundamentally upended Washington, staring down “a corrupt and broken political establishment” and restoring a government “of, for, and by the people.”

Read More
70 Ways President Trump Has Changed the Nation Over the Past Two Years
How Trump Changed America, World in 2018

“We stared down the unholy alliance of lobbyists and donors and special interests who made a living bleeding our country dry,” he said. “We broke down the doors of Washington backrooms where deals were cut to close our companies, give away your jobs, shut down our factories, and surrender your sovereignty and your very way of life, and we’ve ended it. We took on a political machine that tried to take away your voice and your vote.”

“Many times I said we would drain the swamp and that’s exactly what we’re doing right now—we’re draining the swamp,” he said, to a crowd that responded in cheers.

“And that’s why the swamp is fighting back so viciously and violently,” Trump noted, and spoke of the investigations that culminated in the Mueller report that found no evidence to establish that either Trump or any U.S. citizen knowingly conspired or coordinated with the Russian government ahead of the 2016 presidential election. Trump called it “the greatest witch hunt in political history.”

“The only collusion was committed by the Democrats, the fake news media and their operatives, and the people who funded the phony dossier, crooked Hillary Clinton and the DNC [Democratic National Committee],” Trump said.

Trump encouraged the crowd to come out and “vote vote vote” at the 2020 United States elections on Nov. 3.

“Remember the only thing these corrupt politicians will understand is an earthquake at the ballot box,” he said.

Continuing his speech, Trump touched on multiple issues dealt with in his time as president, from the repealing of Obamacare to pulling out of the Paris Agreement.

He spoke of having improved the economy of the country and praised the low unemployment rates, low poverty rates, as well as the creation of some six million new jobs and the rise of wages since the last election. Trump said the administration also passed the largest package of tax cuts and reforms in U.S. history.

On trade, Trump touched on how the country pulled out of the Trans-Pacific Partnership and NAFTA. He spoke about how the United States made new deals with Mexico and Canada, and imposed tariffs on China.

“Thanks to our tariffs, American steel mills are roaring back to life. We’ve taken historic action to confront China’s chronic trading abuses. It should have been done a long time ago, but the days of stealing American jobs and American companies, American ideas and wealth—those days are over,” he said.

Besides the economy, Trump spoke of healthcare initiatives, including the administration’s actions to address the opioid crisis, which he called a “scourge of our country.”

Trump also noted his administration’s efforts to champion affordable healthcare for Americans. Earlier in his speech, he slammed Obamacare, calling the individual mandate under Obamacare “one of the worst things anybody’s ever had to live through.”

“We got rid of the individual mandate. How many people are happy? They no longer have to pay for the privilege of not paying for bad health insurance,” he said.

Trump also praised the administration’s Right to Try bill, which he signed into law last year. The law enables terminally ill Americans to try experimental treatments not currently approved by the Food and Drug Administration. Trump also spoke of a bill he signed in June 2018 that expanded private care options for veterans.

In defense and military, Trump praised the creation of a military Space Force and the destruction of the ISIS terrorist group. Trump also spoke about ending the Iran nuclear deal and the sanctions the United States has imposed on Iran.

“We’re charting a path to stability and peace in the Middle East, because great nations do not want to fight endless wars,” he said.

Trump began his reelection effort within weeks of securing a stunning upset victory in the presidential election of 2016. The president filed paperwork for his 2020 candidacy on the day of his inauguration, and held his first 2020 rally in February, 2017, in nearby Melbourne, Florida.

He has continued holding his signature “Make America Great Again” rallies in the months since.

In Orlando, Trump told the crowd that he was standing “before you to officially launch my campaign for a second term as president of the United States.”

“We’re going to keep making America great again, and then we will indeed keep America great,” Trump said. “I can promise you that I will never ever let you down.”

He asked whether he should stick with “Make America Great Again” or upgrade. His new campaign slogan—”Keep America Great”—was greeted with cheers.