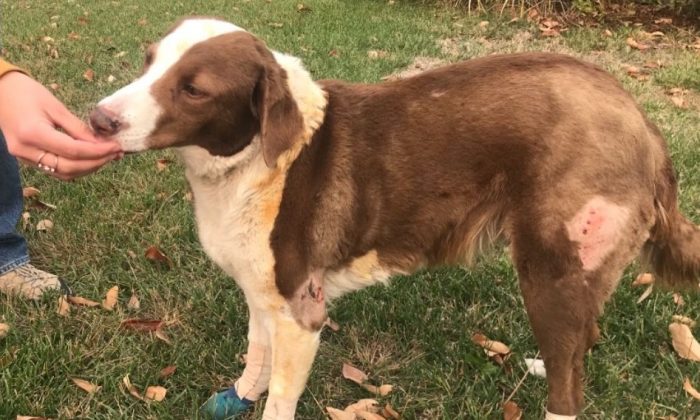 As the Camp Fire ravaged the small Northern California city of Paradise, days later, a family found their dog guarding a home. (Kayla Westman/GoFundMe)
US News

As the Camp Fire ravaged the small Northern California city of Paradise, days later, a family found their dog guarding a home.

Leahna Copsey’s home was destroyed, as were many on her block, but one house remained standing. That’s where they discovered Ella, the family’s border collie, standing watch, according to reports.

Copsey said that when evacuation orders were issued due to the fire, she had no idea the fire would reach her home.

“We did not get an evacuation order until 4 p.m. that day,” Copsey’s 24-year-old daughter Kayla Westman told People magazine.

Copsey decided to leave Paradise and went to Chico, a nearby city, with her two daughters. She was under the assumption she would be able to return later in the day.

According to Fox News, Copsey began to pack up some random items but was unable to locate the dog.

She said that as the family was evacuated, she “thought about Ella and hoped for the best. But [the family] had to go,” Fox reported.

ELLA IS TRULY A LOYAL FAMILY PET YET WAS LEFT BEHIND! SHE WAS BURNED ON HER FEET&BODY. SHE HAS A GO-FUND ACCT FOR HER CARE! TY GOD HELP HER IN HER RECOVERY!🙏😍https://t.co/vUVcFpGzmJ

When they got back, they discovered that Ella had made it through the fire.

Ella suffers “minor burns” in the blaze, she said.

On a GoFundMe page, Westman said she got “rude messages” from people who jumped to conclusions as to what happened.

Her family, according to the page, “fully [expected] to be home in the afternoon” after they escaped their home. They also left behind “chickens, home videos, photo albums filled with pictures that are now lost forever and only in our memories.”

“As soon as my mom and sisters hit the main road, that’s when they realized how serious it was. They weren’t able to move,” Westman told People magazine. “There’s people all of a sudden running out of their cars because traffic’s not moving and the fire, all of a sudden, was that close. Nobody really knew it was going to jump that quickly when all of us were thinking. ‘Oh, it’s aways away, we have a day or more,’ you know?”

Up to 400 people fanned out Sunday to search the ash and rubble where homes once stood before flames roared through the Sierra foothills town of Paradise and surrounding communities, killing at least 77 people in the deadliest U.S. wildfire in a century, according to The Associated Press.

A team of 10 volunteers, accompanied by a cadaver dog, went from house to house in the charred landscape. They scrutinized the rubble in five-minute sweeps, using sticks to move aside debris and focused on vehicles, bathtubs and what was left of mattresses.

Sheriff Kory Honea said it was within the “realm of possibility” that officials would never know the exact death toll from the blaze. He also questioned whether the search for remains could be completed by midweek when rain is forecast.