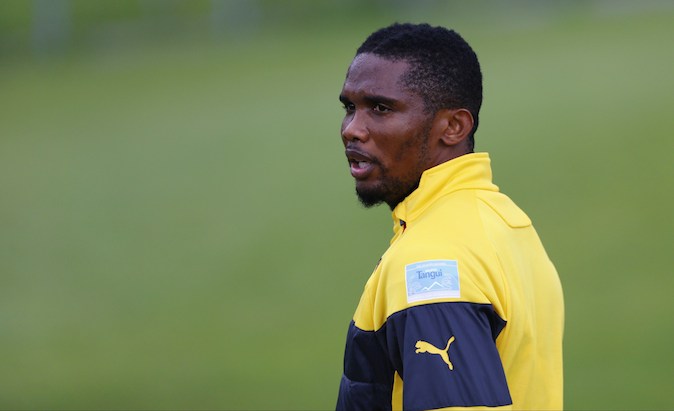 Cameroon's forward Samuel Eto'o looks on during a training session in Walchsee, Austria on May 28, 2014 ahead of a friendly football match against Germany, on June 1, 2014 in preparation for the FIFA World Cup Brazil 2014. (PIERRE TEYSSOT/AFP/Getty Images)
News

The Cameroon vs Paraguay soccer international friendly match is set for Thursday, May 29.

The game will stream live on Abu Dhabi Sports 3 HD.

Volker Finke’s Cameroon side performed will in their 2-0 win over Macedonia in Austria on Monday as they build towards the World Cup. Cameroon will face Mexico on June 13.

Striker Pierre Webo was on target in that match with an acrobatic opener in the second half but injured his shoulder in the act of scoring, placing his participation at the tournament into doubt.

However, a medical examination has shown that Webo’s injury is not serious, and is certainly welcoming news for a Cameroon side that has been drawn in a tough group.

Cameroon will face hosts and favorites Brazil, Croatia and Mexico in Group A

Meanwhile, Paraguay have won just one of their last nine games and failed to qualify for the World Cup, finishing bottom of the Conmebol group after garnering 12 points from 16 games.

The focus for Paraguay will thus be on working towards the 2015 Copa America, which will take place in Chile.

Coach Victor Genes will likely pick a youthful squad for this clash and an encounter with France on June 1, with nine of the 21-man group aged 23 or under.

Malaga striker Roque Santa Cruz is set to captain the side, and will hope to test the Cameroon defense as the African outfit try to build momentum ahead of a challenging World Cup campaign.