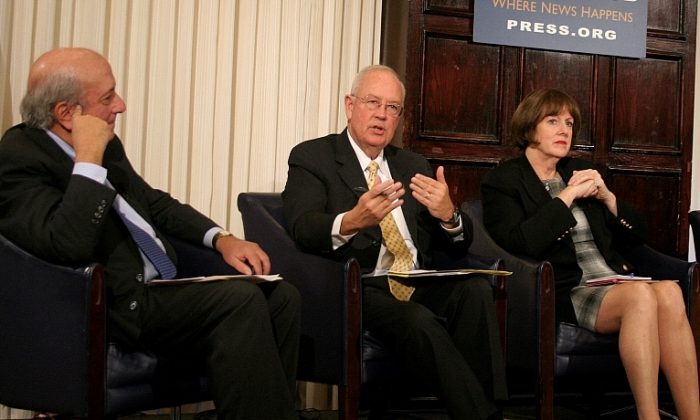 Cameras, Grandstanding and the Supreme Court

WASHINGTON—The justices of the Supreme Court seem to be living in a bygone age. They forbid cameras or audio recorders in their courtroom.

For a journalist, a dominant concern is “the Court’s persistent refusal to allow broadcast coverage of the proceedings,” said Tony Mauro, who has covered the Court for 33 years and is Supreme Court correspondent for the National Law Journal. Mauro moderated a panel at the National Press Club, Oct. 25.

The Supreme Court does not permit live audio or video recordings during the oral argument or opinion announcements. Rarely does it release same-day audio of oral arguments.

It is a holdout in “the growth of the digital age and unstoppable momentum of transparency for all institutions all the time,” Mauro said.

In many other courts, audio is streamed live, according to Mauro.

Maureen O’Connor, chief justice of the Supreme Court of Ohio, said that all 50 state supreme courts permit cameras in the courtroom, though about 14 states have restrictions on trial courts and some civil cases. She said that the Ohio Supreme Court has allowed cameras for 10 years and found it unobtrusive.

O’Connor said that in Ohio the broadcasts are archived and used as teaching tools for law students and litigants. All the opinions are available online. The judicial process is transparent.

The Supreme Court hears monumental cases, such as the constitutionality of the Affordable Care Act. The cases affect American’s lives. Yet the public must rely on the media filtering process to access their government, she said.

“We have [reporters] that filter the information, and often they themselves have not been in the courtroom to observe,” she said. The information is stale by the time it reaches the public. She said for her as a lawyer, a justice, and an American citizen, that is unacceptable.

Audio recordings are released normally on Fridays. Before 2010 it was at the end of each term, according to the Daily Beast. For important cases like the Affordable Care Act and the Voting Rights Act, the audio was released the same day, but Mauro said same-day releases are “rare and unpredictable.”

O’Connor said the Supreme Court needs to get past its 19th century thinking.

Older Justices Stephen Breyer, Antonin Scalia, and Clarence Thomas have opposed cameras in the courtroom, according to the Daily Beast.

The younger Justices Elena Kagan and Sonia Sotomayor are on record in favor of televising proceedings, but since joining the Court, have become less enthusiastic.

The arguments against it were that the deliberations might become a performance, that video snippets would be used out of context, and that the justices would lose anonymity.

Chief Justice Roberts said about live recordings in June 2011, “We unfortunately fall into grandstanding with a couple of hundred people in the courtroom. I’m a little concerned about what the impact would be.”

Williams said that Justice Antonin Scalia said that most viewers wouldn’t watch the whole thing and that only snippets would be broadcast. A broadcaster might distort a viewpoint.

Scalia said he wouldn’t be able to go into a hardware store without being recognized and he prefers his anonymity.

The panelists had little sympathy.

O’Connor said that justices are public servants and should be recognized just like state legislators, governors and mayors are.

Ken Starr, president of Baylor University and former U.S. solicitor general, said Canada has broadcast its court proceedings for 20 years with no grandstanding

With the “collapse of civic education in the United States,” Starr sees the Court as providing an invaluable service in teaching high school and college students. Neal Katyal, Georgetown Law professor and former acting U.S. solicitor general, said, “The civic education benefits are undeniable and tremendous.”

The Court only has 250 to 400 seats available for the public—at most 400, said Starr. So now there is very little civic education possible under the present structure.

On the snippet argument, Williams said that there is little doubt that C-SPAN would televise hearings and it would also be available on the Internet, but conceded that Scalia is right that most people would not watch it entirely. However, he said that news articles contain quotes from the proceedings that function no different from Scalia’s snippets.

Williams’ answer to Scalia was, “The video would be more faithful to what was said in the Court.”

Katyal and Starr think Americans should be able to see the Supreme Court working. Katyal called it the “Temple of Truth.”

O’Connor said that as public servants, the justices should put the public interest before their own personal concerns.

Katyal said his generation is accustomed to being recorded. “So the Supreme Court will look extremely idiosyncratic to be the one place which is a camera-free zone,” he said.