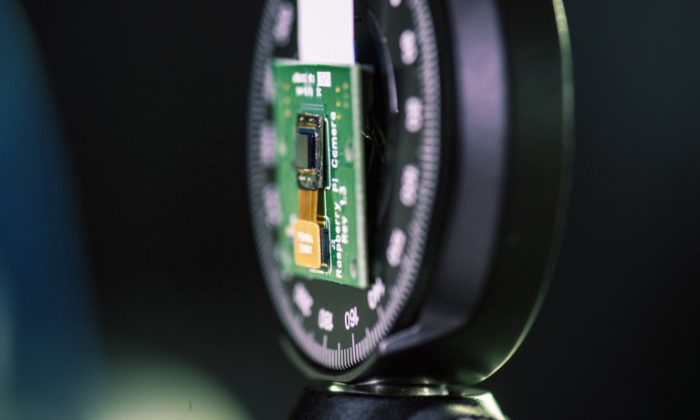 "Moving from a cube design to just a surface without sacrificing performance opens up so many possibilities," says Richard Baraniuk. "We can make curved cameras, or wallpaper that's actually a camera. You can have a camera on your credit card or a camera in an ultrathin tablet computer." (Credit: Jeff Fitlow/Rice)
Tech

Camera Prototype Is Thinner Than a Dime

A patented prototype called FlatCam is little more than a thin sensor chip with a mask that replaces lenses in a traditional camera.

Sophisticated computer algorithms are what make it practical—they process what the sensor detects and convert the sensor measurements into images and videos.

Traditional cameras are shrinking, driven by their widespread adoption in smartphones. But they all require lenses—and the post-fabrication assembly required to integrate lenses into cameras raises their cost, according to the researchers.

FlatCam does away with those issues in a camera that is also thin and flexible enough for applications that traditional devices cannot serve. FlatCams can be fabricated like microchips, with the precision, speed, and the associated reduction in costs, says Ashok Veeraraghavan, assistant professor of electrical and computer engineering at Rice University.

Without lenses, he says, the most recent prototype is thinner than a dime.

“Our design decouples the two parameters, providing the ability to utilize the enhanced light-collection abilities of large sensors with a really thin device,” he says.

FlatCams may find use in security or disaster-relief applications and as flexible, foldable wearable, and even disposable cameras, he says.

The researchers are realistic about the needs of photographers, who are far more likely to stick with their lens-based systems. But for some applications, FlatCam may be the only way to go, says Richard Baraniuk, professor of electrical and computer engineering.

“Moving from a cube design to just a surface without sacrificing performance opens up so many possibilities,” he says. “We can make curved cameras, or wallpaper that’s actually a camera. You can have a camera on your credit card or a camera in an ultrathin tablet computer.”

FlatCam shares its heritage with lens-less pinhole cameras, but instead of a single hole, it features a grid-like coded mask positioned very close to the sensor. Each aperture allows a slightly different set of light data to reach the sensor. Raw data sent to the back-end processor—for now, a desktop computer—are sorted into an image. Like much larger light field cameras, the picture can be focused to different depths after the data is collected.

The hand-built prototypes use off-the-shelf sensors and produce 512-by-512 images in seconds, but the researchers expect that resolution will improve as more advanced manufacturing techniques and reconstruction algorithms are developed.

This Cheap Camera Gets Under the Skin

The FlatCam team is working with the Rice lab of Jacob Robinson, an assistant professor of electrical and computer engineering, to develop next-generation, directly fabricated devices.

The prototypes do not have viewfinders. Many applications won’t need one, says coauthor Aswin Sankaranarayanan, but a cellphone screen may eventually serve the purpose. “Smart phones already feature pretty powerful computers, so we can easily imagine computing at least a low-resolution preview in real time,” he says.

The research team will deliver a talk about its work at the Extreme Imaging Workshop Dece. 17 in Santiago, Chile. A paper on the work is available via ArXiv. The National Science Foundation supported the research.