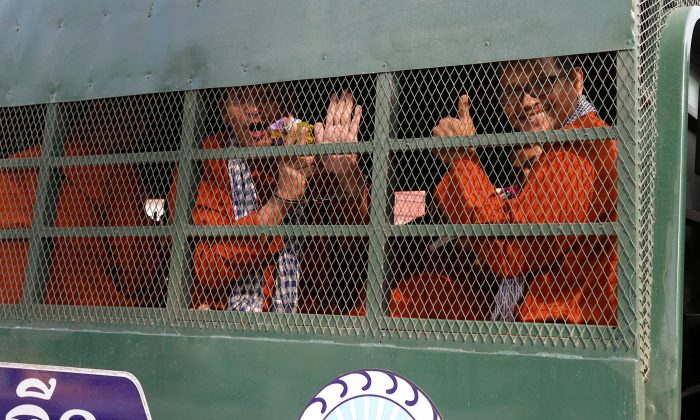 Members of the dissolved opposition Cambodia National Rescue Party (CNRP) react inside a police vehicle on their way to attend a verdict announcement at the appeal court in Phnom Penh, Cambodia, May 10, 2018. (Reuters/Samrang Pring)
Asia & Pacific

The decision comes amid growing concern about a crackdown on his critics by Prime Minister Hun Sen, who has ruled the country for 33 years, ahead of a general election set for July 29.

The 11 members of the Cambodia National Rescue Party (CNRP) were jailed for terms ranging from seven to 20 years in 2014, after they forcibly tried to reopen the country’s only designated protest venue, “Freedom Park”, in July that year.

Critics say Hun Sen stepped up pressure on his enemies after his ruling Cambodian People’s Party (CPP) narrowly won a 2013 general election, following the loss of seats to the CNRP.

Such fears were revived after weekend news of the sale of the Phnom Penh Post newspaper to a Malaysian businessman whose public relations firm lists Hun Sen as a client.

That led to the resignation of as many as 13 foreign journalists from the 26-year-old paper, which Cambodian civil society bodies called the country’s “last independent paper.”

Dozens of radio stations have been forced off the air and an English-language newspaper, the Cambodia Daily, was forced to close last year after the government gave it a month’s deadline to settle a $6.3-million tax bill.

New York-based Human Rights Watch said the case against the opposition aimed to silence government critics ahead of the election.

“Prime Minister Hun Sen and the ruling Cambodian People’s Party apparently decided to lock up political opponents to stave off defeat at the ballot-box,” Brad Adams, the group’s Asia director, said in a statement on Monday.