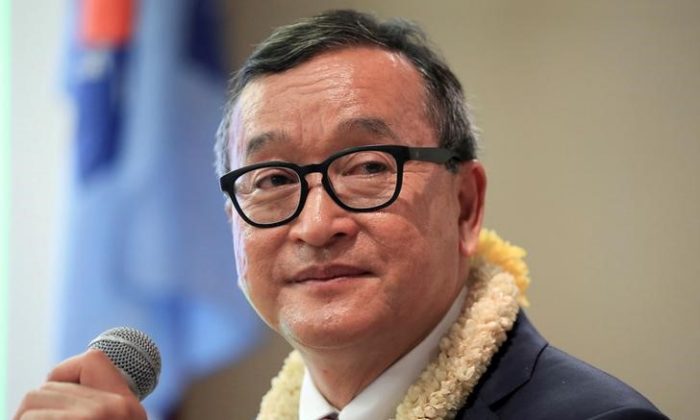 The former opposition leader announces return to politics
By Reuters

The authoritarian government called for the ban after arresting Cambodia National Rescue Party (CNRP) leader Kem Sokha on Sept. 3 and charging him with “treason” for an alleged plot to take over the Southeast Asian country with “help from the United States.”

The CNRP and Hun Sen’s opponents say the charges are politically motivated to eliminate Kem Sokha from next year’s election so that strongman Hun Sen, who is currently the world’s longest-serving prime minister, can extend his more than 32 years in power.

The judge who heads the Supreme Court, Dith Munty, is a member of the permanent committee of the ruling CPP and a longtime Hun Sen loyalist.

“There is no chance whatsoever for CNRP to escape dissolution,” said Mu Sochua, a deputy of Kem Sokha who fled abroad last month saying she feared arrest in a widening crackdown by the government.

“November 16, 2017 will mark the end of true democracy in Cambodia,” she told Reuters, adding that the ruling party would face local condemnation and possible international sanctions.

Hun Sen, the former Khmer Rouge commander, has held power since 1985 by intimidating and dividing his enemies and through legal proceedings that have occasionally led to political bans on rivals at critical moments.

Next year’s election was shaping as possibly the biggest challenge to Hun Sen’s leadership, after his opponents unified behind the CNRP.

Former CNRP leader Sam Rainsy, who fled to France in 2015 to escape a jail term for defamation, announced on Wednesday. Nov. 15, he was returning to the party that he quit in February over fears his membership would lead to it being banned

The veteran opponent of Hun Sen said the party would be dissolved anyway so his membership now made no difference.

A government official said Sam Rainsy’s return would only provide further justification for dissolving the party.

“He is not mature. He has no political philosophy and doctrine, but only anger and hatred,” Huy Vannak, undersecretary of state at the Interior Ministry, told Reuters. He also noted that the CNRP had not defended its position in court.

A party lawyer, Sam Sokong, said there had been no point because the case was politically motivated.

But in the opposition camp, Rainsy’s supporters commenting on his Facebook post believe he has plenty to stand for.

In his Facebook post, Rainsy writes on the “CPP or its precursor’s historical leaders who have harmed Cambodia the most.”

1- Son Ngoc Minh (1920-1972)
As the CPP’s Founding Father and Vietnamese-puppet Secretary General from 1951 to 1954 Son Ngoc Minh supported and endorsed Cambodia’s invasion by the Vietnamese communist forces named Vietminh. Under the CPP’s banner the Vietminh created havoc in Cambodia where they militarily fought against our Nation, Religion and King in the early 1950s. Serving foreign interest to the detriment of his own nation’s, Son Ngoc Minh was a national traitor.

2- Pol Pot (1925-1998)
From 1962 to 1979, Pol Pot was Secretary General of the CPP (or more precisely the Cambodian People’s Revolutionary Party), which changed its name to Cambodian Workers’ Party in 1960 and to Cambodian Communist Party in 1966. As leader of the murderous regime named Democratic Kampuchea from 1975 to 1979, Pol Pot was responsible for the death in dreadful conditions of some two million people. He was definitely a criminal.

3- Hun Sen (1952 – )
Hun Sen became CPP President in 2015 after being previously its Vice President. In 1979 the CPP took back its original name as adopted in 1951 (Cambodian People’s Revolutionary Party). In 1991 this name was reconfirmed, but without the word “Revolutionary.” Hun Sen has been Prime Minister since 1985 under successively the communist People’s Republic of Kampuchea (1979-1989), the crypto-communist State of Cambodia (1989-1993) and the current fascist regime known as the (Banana) Kingdom of Cambodia (1993 – ).

A) Hun Sen is a national traitor because
– He prominently contributed to make Cambodia lose her independence and national sovereignty and become a satellite of Vietnam after 1979.
– He was responsible for the loss of large portions of Cambodia’s territory with his concluding unacceptable border treaties with Vietnam in the 1980s.
– He was behind the loss of invaluable national riches because of the massive deforestation and the illegal sale of countless state assets by his corrupt governments in the 1990s, 2000s and 2010s.
B) Hun Sen is a criminal because
– As a Vietnamese-puppet prime minister, he implemented the deadly K5 Plan conceived by Hanoi that resulted in the death in dreadful conditions of tens of thousands of people in the 1980s.
– He ordered his henchmen to kill hundreds of people in several events in 1997 (military coup, extra judicial killings and a deadly grenade attack in Phnom Penh) and 1998 (violent repression of popular protests against election irregularities).”

Western countries have condemned the government’s crackdown on the opposition, civil rights groups and independent media and have called for the release of Kem Sokha to allow credible elections next year.

U.S. President Donald Trump’s senior Asia aide expressed “strong concerns” to Cambodia’s government about the detention of Kem Sokha and restrictions on civil society and the press on Tuesday.

The main evidence presented against Kem Sokha is a video from 2013 in which he talks about a plan to gain power with the help of Americans. He says he was talking about democratic politics.

Cambodia’s capital, Phnom Penh, was calm on Wednesday. But metal barriers were set up outside the gold-embellished Supreme Court and police have been told to watch for trouble.

Few in the capital wanted to give any opinion on the ruling or the possible verdict.

“The court will decide. We cannot do anything,” said Kou Menglay, a taxi driver.