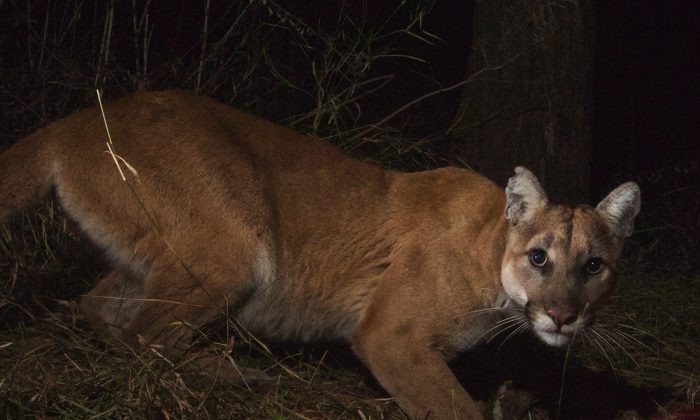 A mountain lion in Malibu Creek State Park on Feb. 20. In California, Mountain lions have been struck and killed by cars, and inbreeding is threatening the population's diversity. (National Park Service)
US

The busy network of freeways in Southern California has especially affected a small mountain lion population living in the Santa Monica Mountains. Mountain lions have been struck and killed by cars, and inbreeding is threatening the population’s diversity.

In response, the California Department of Transportation, or Caltrans, is requesting a $2 million federal grant to begin environmental studies and to design a freeway overpass for the mountain lions. The department is also asking for $500,000 from state and local agencies.

The overpass would cross the 101 freeway west of Los Angeles and is estimated to cost a total of $10 million dollars.

“We’re looking at the possibility of providing some way for them to go from the Sierra Madre Mountains to the Santa Monica Mountains and not be impacted by the freeway,” said Caltrans spokesperson Lauren Wonder.

According to an ongoing National Park Service study started in 2002, 13 mountain lions were struck and killed by vehicles in the Santa Monica Mountains and surrounding habitat.In January, three mountain lion kittens were also killed nearby by motorists.

Biologists have found evidence of inbreeding in the mountain lion population in the Santa Monica Mountains, indicating the animals were having difficulty finding mates. Severe inbreeding can eventually cause physical defects.

“In the long run, if the lions are completely isolated here in the Santa Monica’s, I think it’s just a matter of time before we start to see these genetic issues,” National Park Service biologist Seth Riley told South California Public Radio 89.3 KPCC.

The typical range for mountain lions, also called cougars, pumas, or panthers, is around200 square miles for adult males, and 75 square-miles for adult females, according to the National Park Service. The Santa Monica Mountains National Recreation Area is less than 250 total square miles, while the Los Padres National Forest, which includes the Sierra Madre Mountains, is 12 times larger.

As a result, young males are having trouble keeping a safe distance from adult males to avoid potential violent conflict, which can be another cause of death of the mountain lions.

According to the California government’s website, mountain lions are neither endangered nor threatened in California.

Caltrans said, in addition to helping mountain lions, the overpass would also keep motorists safer, as well as other animals.

“It’s not only mountain lions,” said Wonder. “It’s coyotes, deer, frogs; it’s small and large wildlife populations. But this is really to protect those wildlife and their biodiversity by giving them a greater habitat and not being impacted by cars.”

The overpass would be the first such wildlife crossing built in California.

Wonder was quick to point out that there is no guarantee the project will move forward. Federal funding was denied for two previous requests, one by Caltrans and one by the Santa Monica Mountains Conservancy, to build an underground tunnel for the lions.

Caltrans is also looking at cheaper interim solutions, such as fencing along the side of the road to keep animals from venturing onto the freeway.

Other groups, such as the Santa Monica Mountains Conservancy, the National Park Service, and the National Wildlife Federation, as well as city and county agencies and state legislators, have all been working with Caltrans to push the project forward.