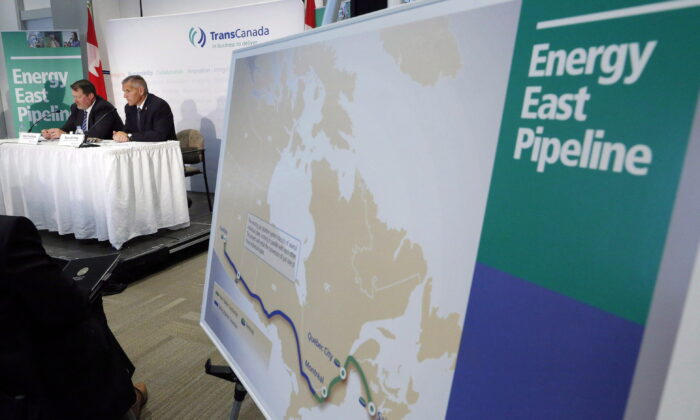 The Energy East pipeline’s proposed route is pictured as TransCanada officials speak during a news conference in this file photo. Amid Russia’s invasion of Ukraine, many are calling for greater Canadian energy security and less dependence on foreign imports, with a pipeline running from east to west being a key component of the strategy. (The Canadian Press/Jeff McIntosh)
Canada

Russia’s invasion of Ukraine is prompting renewed calls in Canada to bolster energy security, in particular by building oil and gas pipelines to supply the eastern provinces, and to play a greater role in supporting the energy needs of European allies.

“One would think that this would be the opportunity for Canada to pick up its game and begin the process of ensuring that we have energy security, by having a pipeline from east to west, and that we do not import anyone else’s oil,” said Dan McTeague, a former Liberal MP and president of Canadians for Affordable Energy, in an interview with The Epoch Times.

It would also show “that we are hoping to export our oil in a safe, responsible, environmentally effective manner that I think very few other nations can boast,” he added.

“As one of the largest free market sources of global energy resources not controlled by state-owned enterprises, and with high environmental, social, and governance standards, Canada can contribute to global and regional energy security by cooperating with allies and partners to supply the energy and critical mineral resources they will need,” Kucharski said in a Macdonald-Laurier Institute report titled “The Evolution of Energy Security in the Indo-Pacific: Why Is It Important for Canada?”

On March 1, the U.S. benchmark West Texas Intermediate rose noticeably above US$100 a barrel to levels not seen since the heady days of 2014.

After a slew of sanctions against Russia that forced its stock market to shut down and its currency to fall to a record low, Prime Minister Justin Trudeau on Feb. 28 announced a ban on imports of Russian crude oil.

Canada hasn’t actually imported any crude oil from Russia since 2019, and it doesn’t import natural gas from that country either.

“What I would have expected the prime minister to do yesterday would be to redouble the effort to ensure this east-west corridor for pipelines to ensure that we have access to tidewater so that we can help Europe,” McTeague said.

Russian natural gas supplies to the European Union and indirectly the United Kingdom accounted for 32 percent of the region’s total gas demand in 2021, according to the International Energy Agency. The IEA also notes that Russia is the world’s third-largest oil producer and the largest exporter, with around 60 percent of its oil exports going to Europe.

Statistics Canada data shows that Canada imported energy products worth $378.8 million from Russia in 2021, with Quebec accounting for 58.6 percent of the total and Newfoundland and Labrador 35 percent. The imports are mostly refined petroleum products like motor gasoline or diesel.

Natural Resources Minister Jonathan Wilkinson followed up on Trudeau’s announcement by tweeting on March 1 that all refined and other petroleum products from Russia will also be banned.

“We continue to monitor the supply situation closely with partner International Energy Agency countries and, if necessary, are prepared to act jointly to maintain security of supply in energy markets,” Natural Resources Canada said in a Feb. 28 statement.

In advocating for a ban on Russian energy imports, McTeague tweeted on Feb. 27, “Enough with subsidizing Putin’s attack on Ukraine. We have blood on our hands.”

Quebec’s ministry of energy and natural resources told The Epoch Times that its provincial imports do not include crude oil or gas and that its supply chain for these primary energy products is 100 percent North American and mainly transported via pipelines.

“Imports from outside North America are not part of our energy policies or strategy, though some businesses may choose to import rather than purchase locally. As stated by Premier Legault, we will fully support any measure taken by the federal government in the context of the conflict between the Russian Federation and the Ukraine, including import restrictions,” press officer Genevieve Tremblay said.

McTeague argues that there shouldn’t be a distinction between importing raw product and importing processed product.

TD Securities pointed out in a Feb. 27 note to clients that Russia brought in US$160 billion last year from its exports of natural gas and crude oil, and said that if the country is able to continue to export, the revenues brought in should be able to cover TD’s estimate of what the Russian government and banking sector need in the short term.

“Reform the pipeline approval process, … recognizing energy as vital to Canadian and European defence and security,” Bergen said in action proposed on Feb. 26 to mitigate the medium- and long-term threat from Russia.

The premiers of Alberta and Saskatchewan have both condemned Canada for importing Russian energy products and effectively financing the war on Ukraine.

TransCanada, renamed TC Energy in 2019, cancelled its Energy East project in 2017. The proposed 4,500-kilometre pipeline would have carried 1.1 million barrels of crude oil per day from Alberta and Saskatchewan to refineries in Eastern Canada.

TC Energy then confirmed termination of its Keystone XL project in June 2021, after halting construction work on Jan. 20, 2021, following U.S. President Joe Biden’s revocation of the permit for the pipeline on his first day in office as president.

“It is tragic that Canada doesn’t have the eastern or northern-bound pipeline export infrastructure capacity in place to support our NATO and European allies to send them oil and gas in these difficult times,” said James Moore, former industry minister and now senior business adviser to multinational law firm Dentons, in a Feb. 24 tweet.

The U.S. oil and gas industry also recognizes that a number of problems could be solved with pipelines built in Canada.

EQT CEO Toby Rice told CNBC on Feb. 28 that Russia’s power comes from its ability to export energy and that New England is the only state that imports Russian natural gas. EQT is the largest natural gas producer in the United States, according to the company’s website.

Rice said what could be done immediately included approving the Keystone XL pipeline and new pipelines in New England.

“Let’s activate the Keystone XL pipeline that will bring 800,000 barrels a day into our states from a trusted ally Canada,” he said.

“These are things that are going to bring energy security to our shores.”

McTeague says the world has changed in the past week, since the Feb. 24 Russian invasion of Ukraine.

“It’s time for technocrats, bureaucrats, and our politicians to smell the coffee. As it were, we seem to be more interested in the source of our coffee than we do the source of our oil that we tend to consume.”