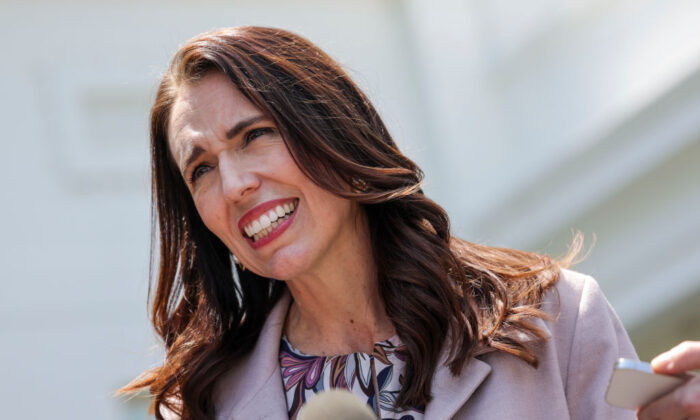 New Zealand Prime Minister Jacinda Ardern speaks to members of the media after meeting with U.S. President Joe Biden, at the White House in Washington, on May 31, 2022. (Kevin Dietsch/Getty Images)
Asia & Pacific

PM Says Giving Guns to NZ Businesses ‘Not the Answer,’ As Crimewave Grips the Country

New Zealand Prime Minister Jacinda Ardern said arming business owners is not the answer to the recent spate of crimes the small island nation is currently experiencing, including ram raids by youth offenders, gang violence and shootings, and stabbings.

Dairy and Business Association Chair Sunny Kaushal said the government needed to acknowledge how serious the situation had become.

“A sense of lawlessness is now gripping all of New Zealand, and the soft on crime approach is not working,” he told Newshub.

“We are calling the prime minister to declare a crime emergency in New Zealand. It is that serious.”

Kaushal said many small businesses were hiring their own security, with many going to him for advice on how to get a gun.

“It’s become that serious because if the police and authorities are not able to save them, they have to save themselves,” he said.

Ardern responded to his comments, saying that she understood the concern existed but that arming business was “not the answer.”

The opposition party has repeatedly called the government too “soft” on crime.

National Party’s police spokesman Mark Mitchell said he believes that the police pursuit policy change in 2020, where pursuing fleeing vehicles is only justified when the threat of the person fleeing “outweighs the risk of harm created by the pursuit,” was one of the issues behind the rising crime rates.

“The police need to urgently review their pursuit policy—since the change in policy, 83 percent of fleeing drivers are not getting arrested. Young offenders have realised they can steal a car or flee the scene of a crime without the risk of being pursued or stopped by the police,” he said in May.

Police Commissioner Andrew Coster has since indicated that the 2020 changes to pursuit policy were currently under review.

Minister of Police Poto Williams also noted that the Labour government had increased policy funding by 35 percent since 2017, with further funding included in this year’s budget.

Under the 2022 budget, the government has made it a priority to increase the number of frontline police.

Further, while in line with the government’s policy of being “tough of crime,” a programme focusing on the causes of child and youth offenders will be undertaken.

“And police is increasing the focus on the unlawful behaviour of gang members through a nation-wide operation (Cobalt), which will see police districts focus specifically on suppressing and disrupting gangs,” Williams told The Epoch Times.

“I know police are working diligently to combat criminal activities so our communities are safe and feel safe, and have recently made a number of arrests and charges and seized a number of firearms.”

Despite the record investment, New Zealand is currently experiencing a wave of crime that has led to increasingly louder calls for action.

To protect small businesses from the spate of ram raids that have occurred over several months, the government announced in late May $6 million in funding that will go towards measures including installing bollards or other protective structures.

Mitchell said the announcement had been “too little, too late” in addressing the “explosion” of youth crime in New Zealand.

“Until this Labour government cracks down on crime, youth offenders, gang members, and organised crime groups will continue to behave and act with impunity,” he said.

Police Minister Williams said the role of the government was to support the police in responding to gang tensions, which has escalated in Auckland between the Killer Beez and Tribesmen gangs.

The result of the rising tensions has been a string of drive-by neighbourhood shootings, with the most recent one at a home in Clover Park on Monday night that left the front window filled with multiple bullet holes. No one was injured, and no arrests have been made.

Police are investigating the incident under Operation Dairyland, which focuses on the recent wave of gang-related firearm incidents and suspicious fires across Auckland.

Many homes have been left in similar conditions, with police arriving at multiple shootings and suspicious fires throughout May. On one night, there were seven shootings.

Commander Superintendent Jill Rogers said the operation had, so far, seen 19 arrests and 25 charges made for firearms and drugs.

“Since the operation began, 21 searches have been executed across Auckland with Police seizing a total of nine firearms and 341 rounds of ammunition,” she said.

National Party leader Christopher Luxon said the community was seeing an intensity and aggression in gang violence that had never been seen before.

“We have to acknowledge that New Zealanders aren’t feeling safe in their communities at the moment,” Luxon told reporters on Tuesday. “We’ve seen a 21 percent increase in violent crime; we’ve seen a 40 per cent-plus increase in gang membership.”

Luxon said he wanted to see firearm prohibition orders that have warrantless search powers so police could crackdown on illegal guns and a dedicated gang unit.

“I think most New Zealanders would be surprised to know that we don’t have one,” he said.

Maori Development Minister Willie Jackson said he heard the concerns about violence from the community and believed Minister Williams and the police had it under control.

“I think we’re doing enough, I do, but this is at a scale that we’ve never seen before … I’m worried about our communities because this tit-for-tat stuff I haven’t seen it before. It’s unprecedented in terms of the different gangs, so we’re watching it very closely,” he said.

However, the number of shootings and stabbings unrelated to gangs have also risen, with one person arriving at Bay of Islands Hospital with apparent gun-related injuries.

An elderly man was also stabbed at a food market on the evening of June 1 while standing up to a robbery. It was the second time the store had been robbed recently.