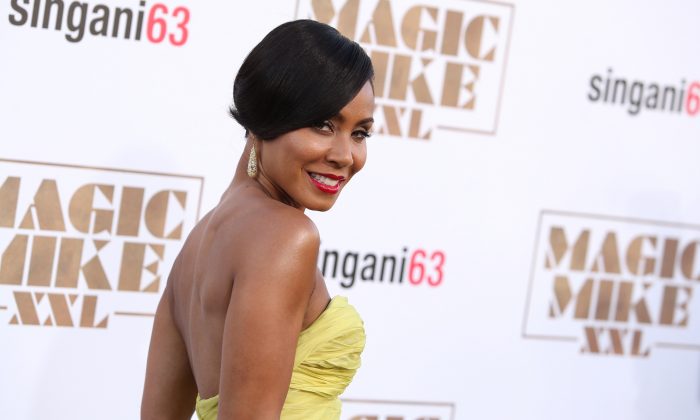 In a Thursday, June 25, 2015 file photo, Jada Pinkett-Smith arrives at the Los Angeles premiere of "Magic Mike XXL" at the TCL Chinese Theatre. Calls for a boycott of the Academy Awards are growing over the Oscars second straight year of mostly white nominees, as Spike Lee and Jada Pinkett Smith each said Monday, Jan. 17, 2016, that they will not attend this years ceremony. (Paul A. Hebert/Invision/AP, File)
Entertainment

Calls for Boycott of Oscars Grow Over Diversity of Nominees

NEW YORK—Calls for a boycott of the Academy Awards are growing over the Academy of Motion Pictures Arts and Sciences’ second straight year of mostly white nominees, as Spike Lee and Jada Pinkett Smith each said Monday that they will not attend this year’s ceremony.

In a lengthy Instagram post, Lee said he “cannot support” the “lily white” Oscars. Noting that he was writing on Martin Luther King Jr. Day, Lee—who in November was given an honorary Oscar at the Governors Awards—said he was fed up: “Forty white actors in two years and no flava at all,” he wrote. “We can’t act?!”

In a video message on Facebook, Pinkett Smith also said she wouldn’t attend or watch the Oscars in February. Pinkett Smith, whose husband Will Smith wasn’t nominated for his performance in the NFL head trauma drama “Concussion,” said it was time for people of color to disregard the Academy Awards.

“Begging for acknowledgement, or even asking, diminishes dignity and diminishes power,” she said. “And we are a dignified people and we are powerful.”

She added: “Let’s let the academy do them, with all grace and love. And let’s do us differently.”

At the Oscars…people of color are always welcomed to give out awards…even entertain, (pt. 1)

But we are rarely recognized for our artistic accomplishments. Should people of color refrain from participating all together? (pt 2)

People can only treat us in the way in which we allow. With much respect in the midst of deep disappointment. J (pt 3)

We must stand in our power!

We must stand in our power.

Last year’s all-white acting nominees also drew calls for a boycott, though not from such prominent individuals as Lee and Pinkett Smith. Whether it had any impact or not, the audience for the broadcast, hosted by Neil Patrick Harris, was down 16 percent from the year prior, a six-year low.

This year, academy president Cheryl Boone Isaacs has made a point of presenting a more inclusive show. The Feb. 28 broadcast will be hosted by Chris Rock and produced by “Django Unchained” producer Reginald Hudlin and David Hill. On Saturday, Rock, unveiling a new promotion for the broadcast, called the ceremony “The White BET Awards.”

When Oscar nominations were announced Thursday, Isaacs acknowledged she was “disappointed” that all acting nominees were again white. Though there were few performers favored for nominees, many awards handicappers expected nominations for Idris Elba of “Beasts of No Nation” and Benicio Del Toro for “Sicario.”

“Hollywood is like the Rocky Mountains, the higher up you get the whiter it gets and this year’s Academy Awards will be yet another Rocky Mountain Oscar,” said Sharpton.

In his post, Lee made it clear the Academy Awards is only part of the problem in an industry with deep-rooted diversity issues. In his Governors Awards speech, Lee said “It’s easier to be the president of the United States as a black person than be the head of a studio.”

“The Academy Awards is not where the ‘real’ battle is,” wrote Lee. “It’s in the executive office of the Hollywood studios and TV and cable networks. This is where the gate keepers decide what gets made and what gets jettisoned to ‘turnaround’ or scrap heap. This is what’s important. The gate keepers. Those with ‘the green light’ vote.”

#OscarsSoWhite… Again. I Would Like To Thank President Cheryl Boone Isaacs And The Board Of Governors Of The Academy Of Motion Pictures Arts And Sciences For Awarding Me an Honorary Oscar This Past November. I Am Most Appreciative. However My Wife, Mrs. Tonya Lewis Lee And I Will Not Be Attending The Oscar Ceremony This Coming February. We Cannot Support It And Mean No Disrespect To My Friends, Host Chris Rock and Producer Reggie Hudlin, President Isaacs And The Academy. But, How Is It Possible For The 2nd Consecutive Year All 20 Contenders Under The Actor Category Are White? And Let’s Not Even Get Into The Other Branches. 40 White Actors In 2 Years And No Flava At All. We Can’t Act?! WTF!! It’s No Coincidence I’m Writing This As We Celebrate The 30th Anniversary Of Dr. Martin Luther King Jr’s Birthday. Dr. King Said “There Comes A Time When One Must Take A Position That Is Neither Safe, Nor Politic, Nor Popular But He Must Take It Because Conscience Tells Him It’s Right”. For Too Many Years When The Oscars Nominations Are Revealed, My Office Phone Rings Off The Hook With The Media Asking Me My Opinion About The Lack Of African-Americans And This Year Was No Different. For Once, (Maybe) I Would Like The Media To Ask All The White Nominees And Studio Heads How They Feel About Another All White Ballot. If Someone Has Addressed This And I Missed It Then I Stand Mistaken. As I See It, The Academy Awards Is Not Where The “Real” Battle Is. It’s In The Executive Office Of The Hollywood Studios And TV And Cable Networks. This Is Where The Gate Keepers Decide What Gets Made And What Gets Jettisoned To “Turnaround” Or Scrap Heap. This Is What’s Important. The Gate Keepers. Those With “The Green Light” Vote. As The Great Actor Leslie Odom Jr. Sings And Dances In The Game Changing Broadway Musical HAMILTON, “I WANNA BE IN THE ROOM WHERE IT HAPPENS”. People, The Truth Is We Ain’t In Those Rooms And Until Minorities Are, The Oscar Nominees Will Remain Lilly White. (Cont’d)

I want to congratulate all of the Academy Award nominees. These people are quite deserving of being recognized as the…