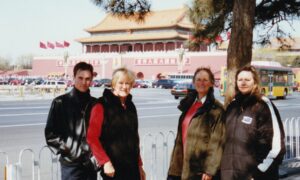 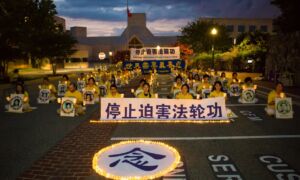 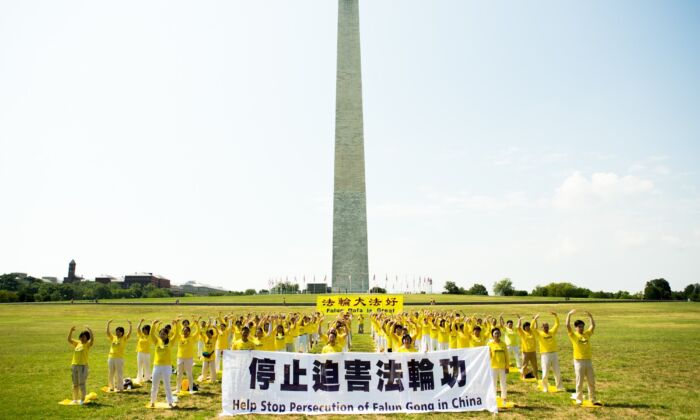 Over one hundred of Falun Gong practitioners are practicing exercises on the grass in front of the Washington Monument to urge the stopping of the CCP's persecution of their spiritual discipline, in Washington, D.C., on July 19, 2020. (Lisa Fan/The Epoch Times)
China Human Rights

Calling For an End to Persecution at the Washington Monument

Over one hundred people gathered at the Washington Monument under the baking sun in over 100 degree Fahrenheit weather on July 19. They wore the same characteristic yellow T-shirt and did slow-motion exercises together.

The group’s bright clothes and peaceful music attracted passersby to stop, who picked up the flyers the group had prepared.

These were local Falun Gong practitioners. While they do their practice’s exercises regularly, this day’s group exercise had special meaning. They were marking the 21st anniversary of the Chinese Communist Party’s (CCP’s) campaign to persecute them, which began on July 20, 1999.

Their practicing together was a public act of mourning for their fellow practitioners who had been killed during the persecution, they said, and also an affirmation of the goodness of Falun Gong.

Falun Gong, also known as Falun Dafa, is an ancient practice based on the principles of truthfulness, compassion, and tolerance whose adherents practice five meditative exercises.

In May 1992, Mr. Li Hongzhi first taught it to the public. By 1999, 100 million people in China—one in 13 Chinese—were practicing Falun Gong, according to Chinese state reports.

Falun Gong adherents talked with The Epoch Times about why they had taken up this spiritual practice.

“The three characters—truthfulness, compassion, and tolerance—attracted me. I thought if everybody followed these characters, the society would be a very wonderful one,” said Yu Jing, a former employee of Pipeline Bureau of China National Petroleum Corporation in northern China’s Hebei Province.

“I couldn’t take care of myself before practicing [Falun Gong]. Having the disease of rheumatoid arthritis, I even couldn’t hold a glass or a meal bowl,” Li Yingmei said. “After practicing Falun Gong for a short period of time, I was able to do everything, and have been very healthy since then.”

The then-head of the CCP Jiang Zemin launched a brutal persecution of Falun Gong on July 20, 1999. He expressed concerns in a letter that he wrote to the Politburo—the highest Party organization—on the evening of April 25, 1999, helping prepare the way for the persecution to come.

“[Falun Gong is] a kind of national organization, with many followers from the Communist Party, officials, scholars, soldiers, as well as workers and peasants,” Jiang wrote in the letter. He feared Falun Gong’s traditional moral teachings were a threat to the legitimacy of the CCP’s ideology, which is based on atheism, materialism, and the idea of struggle.

Wang Hong, a former taxi driver from Shenyang in northeastern China’s Liaoning Province, recalled how he responded to the persecution. “I thought that the CCP launched the persecution because the top leaders didn’t know what Falun Gong was. So, I went to Beijing to tell them the truth.”

Wang and his fellow practitioners arrived in Beijing on July 22, 1999.

Out of Wang’s expectation, the regime didn’t listen to him, but tortured him in labor camps and prisons for several years. The regime sought to force him to give up his belief.

Yu Jing and Li Yingmei also suffered torture in prisons when they were in China.

“One day in August 2000, I was sent back to my cell after being beaten brutally for hours at Langfang Detention Center in Hebei. The prisoners in the cell cried when they saw me. They told me that my face was swollen to a size as big as a basin,” Yu recalled.

Yu and others witnessed their fellow practitioners being tortured to death. Such as Yang Xiaohui and Cao Baoyu from Hebei Province, Li Wendong from Beijing, and so on.

On Sunday, Wang, Yu, Li, and their fellow practitioners stood in front of the Washington Monument, and practiced all five exercises in freedom.

They felt grateful, and with the banners they displayed, and in the informational fliers they passed out, asked people to help stop the persecution.

Xue added CCP can’t represent China, and CCP isn’t China. The fundamental nature of the CCP is evil, which can be seen from its persecuting Falun Gong as well as spreading the CCP virus, passing the Hong Kong version of the national security law, and so on.

“We believe that God is disintegrating the CCP. Now is the time to countdown to the end of the CCP,” Xue said.

Over one hundred of Falun Gong practitioners are sitting on the grass in front of the Washington Monument to urge the stopping of the CCP’s persecution of their spiritual discipline, in Washington, D.C. on July 19, 2020. (Lynn Lin/The Epoch Times)