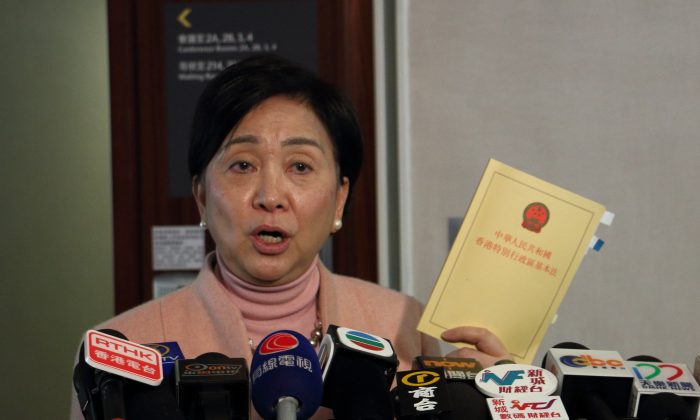 Pointless. That’s what Hong Kong lawmakers of all stripes feel about a call to impose China’s national security laws in the city.

The Basic Law—Hong Kong’s mini-constitution—states that the semiautonomous city is responsible for administering its own laws under a “one country, two principles” system. National legislation doesn’t apply to Hong Kong, barring a state of war or the onset of tumultuous events that threatens “national unity.”

However, a local representative to the National People’s Congress (NPC)—the Chinese regime’s faux legislature—is planning to petition the lawmaking body when it meets in March to introduce state security law in Hong Kong.

Of course, Hong Kong lawmakers can always enact Article 23—a controversial domestic antisubversion law that has been shelved indefinitely after half a million people protested it in 2003—but Ng doesn’t want to leave pro-democracy legislators with the impression that he’s making them choose between the “lesser of two evils.”

Still, if pan-democrats are “afraid” of mainland law, Ng said Thursday on a radio show hosted by local broadcaster Radio Television Hong Kong, “perhaps they should think about how Article 23 could be legislated concretely.”

Ng’s proposal has been taken apart by pan-democrat lawmakers.

Under mainland law, rights activists and lawyers can be locked up for “subverting the state,” Lee says, resulting in miscarriages of justice.

Worse, Hong Kong will lose its role as a financial hub when national standards of censorship are applied through state security laws.

This is because the “Great Firewall of China” will stifle technological innovation—a highlight of Hong Kong leader Leung Chun-ying’s 2015 policy address—and ruin the city’s capitalist system; tantamount to “shooting oneself in the foot,” says Lee.

Democratic Party chairwoman Emily Lau called Ng’s attempt to by-pass the Basic Law “ridiculous” because Hong Kong is guaranteed a “high degree of autonomy” to run its own affairs. This is outlined in the Basic Law, the 1984 Sino-British Joint Declaration, and the “one country, two systems” model, Lau says.

Ip Kwok-him, Ng’s fellow NPC deputy and vice-chairman of the pro-Beijing Democratic Alliance for the Betterment and Progress of Hong Kong party, says the implementation of any national legislation has to be done in accordance with the Basic Law.

Fa Fung-kwok, another NPC deputy, says that the mainland law proposal is very much Ng’s personal view. And the Basic Law already has a security provision in Article 23, Fa says, so nothing needs to be changed.

“The SAR government is not looking into the issue nor does it have any plan to move for the legislation in accordance with Article 23 of the Basic Law,” said Leung, a claim security secretary Lai Tung-kwok repeats.

But Ng will need more than Tung’s approval if he is to voice his contentious view.

At least 30 of 36 Hong Kong NPC deputies need to back Ng’s plan if he is to table it during the state legislature meeting, support pro-establishment lawmaker Michael Tien doubts Ng can muster.

Tien, who was brother James was ousted from China’s top government advisory body in October for openly criticizing Leung’s leadership, says the country’s security is not being threatened in the aftermath of the Occupy Central protests.