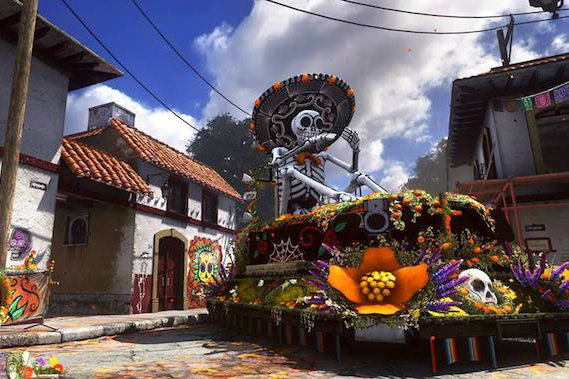 Invasion, the latest DLC for Call of Duty: Ghosts, is out for the Xbox system, but not for the PlayStation or Nintendo Wii.

The Playstation version is speculated to be released in about 4 to 6 weeks, and there’s no word yet on the PC and Wii versions.

A Golden Knife, which allows for faster melee when compared to the standard Combat Knife, is available to unlock at Prestige 5.

A Golden PDW is also available at Prestige 10.

Departed is a medium-sized map set in a rural Mexican town amidst the Dia de los Muertos (the Day of the Dead) celebration. Completing the map’s field order unlocks the Death Mariachi killstreak, which is essentially a new Juggernaut model. The Death Mariachi is armed with Akimbo .44 Magnums, has speed perks, and can turn dead enemies into temporary squad mates.

Pharoah is a medium-sized, complex multi-level map set in an abandoned archeological site of an ancient Egyptian palace. The map features a collapsing monument, urns full of flesh-eating scarabs, and other surprises. Completing the map’s field order grants the player the Blessing of Anubis, which essentially gives the player all perks for the next 4 lives.

Mutiny is a small map located in a secretive cove on a remote Caribbean island. A moored pirate ship provides an elevated, 360-degree perspective of the map. Completing the map’s field orders summons two ethereal ghost pirates, or summons a friendly ship from the seas to rain fire on enemies.

Favela is a refurbished version of a Call of Duty: Modern Warfare 2 map. Completing the map’s field orders will grant the players a  Y-8 Gunship to bring the rain with a 105mm cannon, a 40mm auto-cannon and a 25mm cannon.

The Invasion DLC also contains Episode 3 of the Extinction mode series. The heroes will have to fight their way to the Ark and retrieve “The Cortex,” which is key to helping comprehend the secrets of the Ancestors’ psychic powers.