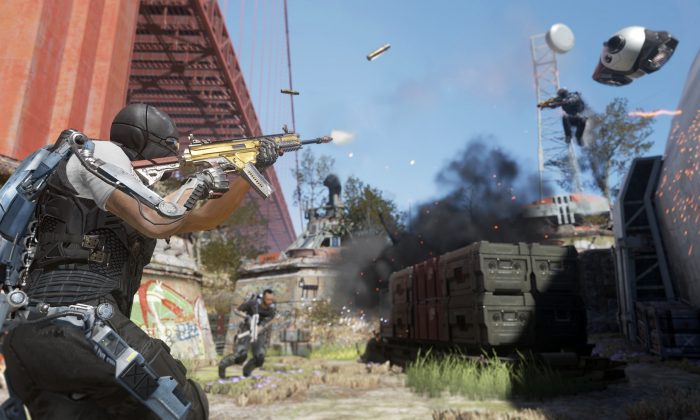 The latest Call of Duty game is nearing completion, and developers are getting excited.

Call of Duty: Advanced Warfare is set for a November 4 release on the PlayStation 4, PlayStation 3, Xbox One, Xbox 360, and the PC, but developer Sledgehammer Games is just about putting the finishing touches on their product.

Sledgehammer co-founder Glen Schofield tweeted out that Advanced Warfare will be the “Best game of our lives.”

“No doubt about it,” he added.

Michael Condrey, Sledgehammer’s other co-founder, tweeted: “I’m getting that rumbling in my belly when things get exciting… #justsayin“

Sledgehammer Games has been slowly unveiling the different game modes over the past month, and recently showed off Multiplayer mode in a game play video.
Fans who played Black Ops II and enjoyed the degree of customization available for character model, weapons and perks layout will be excited to know that Advanced Warfare offers an even greater degree of character and load out customization.
For instance, Advanced Warfare offers 13 slots for players to customize their outfit, primary and secondary weapons, equipment, armor, and killstreaks, up from 10 slots in Black Ops II.
Once players are done tweaking their weapons and gear, they can head over to a shooting range to test and hammer out any problems with their load out before heading to the battlefield.
Check out the game play video below for more information.
Sledgehammer Games has yet to reveal Co-op mode, or say if Zombies mode is making a comeback.
Zombies is a popular co-op or single player game mode that is a feature of Treyarch Call of Duty games such as World at War and the two Black Ops games.
Rumors that Sledgehammer might be bringing back Zombies surfaced after a small “crossed tally” Zombies marking was spotted near the right analogy stick of the Xbox One controller in Microsoft’s Xbox One Call of Duty: Advanced Warfare game bundle.