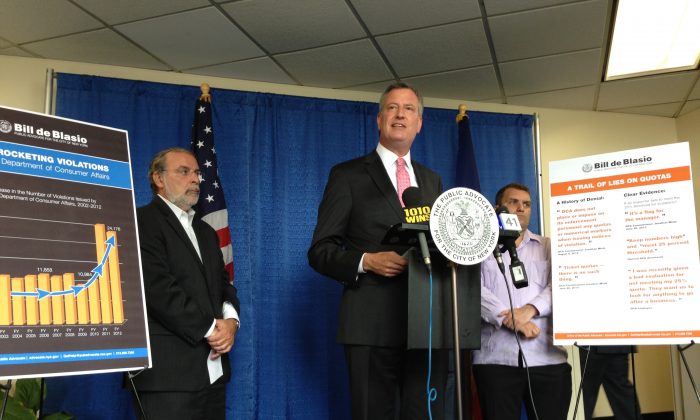 Bill de Blasio, New York City public advocate, speaks at a press conference in his office at 1 Centre Street in Lower Manhattan on June 25, 2013. De Blasio called for the resignation of Jonathan Mintz, the commissioner of the Department of Consumer Affairs. De Blasio's call is based solely on news reports. (Ivan Pentchoukov/Epoch Times)
New York

Call for Mintz’s Resignation Based Solely on News Reports

NEW YORK—New York City public advocate Bill de Blasio’s call for the resignation of the city’s consumer affairs commissioner is based on allegations made in reports in CBS and Daily News.The reports claim that the department is using a system of quotas to force its inspectors to issue fines.

The CBS report features fragments of quotes from DCA Commissioner Jonathan Mintz. The context from which the quotes were taken is unclear. According to Wylie Norvell, spokesperson for De Blasio’s office, the public advocate did not contact CBS to verify the context from which Mintz’s words were extracted.

On June 25, 2013, De Blasio’s office distributed a document to reporters with six items listed under the heading “The Clear Evidence.” Only four of the six items on the document pertain to a system of quotas on fines, all of which are taken from news reports, rather than resulting from an investigation done by the public advocate’s office.

When asked if it is responsible to base a call for resignation on news reports with unverified sources, Norvell said that the call came after years of complaints about unjustified fines.

“It is a pattern of behavior on behalf of the agency that Bill [de Blasio] is responding to,” Norvell said.

The first piece of evidence is taken from a CBS news report with Mintz saying that “it’s a flag for the manager,” right after a cut of a CBS reporter speaking about a system of quotas at the department.

When asked about the context of the quote used in the CBS report, Abigail Lootens, a spokesperson for the DCA, wrote in an email to Epoch Times that Mintz was talking about using performance reviews to ensure that inspectors are doing their jobs, to prevent corruption, and to identify needs for training:

“One of the ways that we make sure our employees are doing their jobs is to review data and if performance falls above or below historic averages, it can be a red flag to a manager to take a closer look and determine if that employee needs more training, clarification on the law, or if corruption is happening. These reviews ensure our inspectors are professional, respectful and treating business equally and fairly.”

The context provided by the DCA is in line with a comment made by Mayor Michael Bloomberg earlier this month. Bloomberg said that a quota system exists for the number of inspections, but not the number of fines.

The next two pieces of evidence in de Blasio’s document are taken from a Daily News article, which references “internal DCA documents” and an “anonymous DCA employee.” A spokesperson from de Blasio’s office said that they reviewed the internal documents, but cannot make them public in order to protect the identity of the person who submitted them.

The fourth piece of evidence is a quote from a retired DCA supervisor referencing a system of quotas on fines. A spokesperson from de Blasio’s office said that the interview was conducted by the public advocate’s office, but the quotation in the document matches exactly the words said by the supervisor in the CBS report.

In the CBS report the supervisor said: “When your violations aren’t up to the standards that they want, they would say that your productivity is low, and then a borough director or supervisor are encouraged to write you up for low productivity.”

The supervisor, Moises Layne, served as a supervisor prior to 2008, according to Lootens, who obtained the information from the DCA human resources department. He then switched to the department’s disciplinary advocate’s office. He left in February 2013 “following disciplinary proceedings brought against him by the department for inadequate performance,” Lootens wrote.

Mintz has denied the existence of a quota system for fines since 2012. In both 2012 and 2013 Mintz wrote to de Blasio regarding quotas: “DCA does not place or impose on its enforcement personnel any quotas or numerical markers when issuing notices of violation.”

De Blasio said that Bloomberg is using a quota system for fines in order to pad the city’s struggling budget. The DCA generated $14.2 million in fines in 2012, according to a report from de Blasio’s office. The city’s budget that year was $65.9 billion.

“Commissioner Mintz simply hasn’t told the truth,” de Blasio said. “We have enough evidence now to know that there is a functional quota system in place.”

De Blasio’s office investigated the DCA in 2012, but was not provided with the documents requested. The public advocate then sued Bloomberg in 2012 to gain access to the paperwork. After reviewing the documents, de Blasio came to the conclusion that a borough bias exists within the DCA, with businesses in neighborhoods in the outer boroughs being inspected more than the citywide average.

“There are no quotas, there is no borough bias, there is just a mayoral candidate using his public office and our taxpayer dollars to ‘investigate’ a scandal that doesn’t exist,” Mintz’s office wrote to Epoch Times on June 26.

Mintz has been with DCA since 2002 and was appointed as commissioner by Bloomberg in 2006.