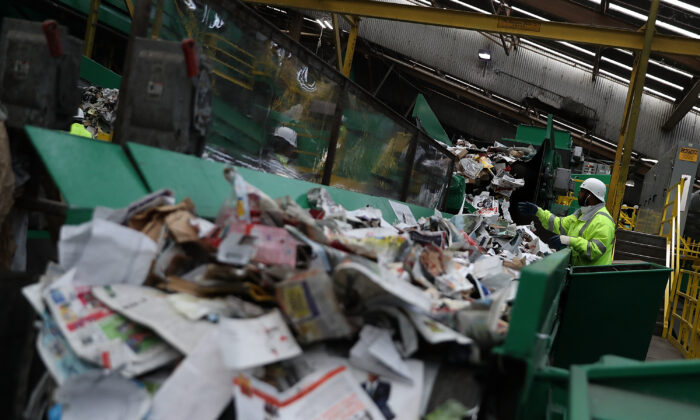 According to industry experts, innovative solutions are necessary in order to combat what some commentators are referring to as a major recycling crisis.

“California is at the epicenter of a nation-wide recycling crisis,” Robert Bikel, Professor of Strategy and Director of the Socially, Environmentally & Ethically Responsible (SEER) Program at Pepperdine Graziadio Business School, wrote on Fox&Hounds Daily.

However, the challenges posed by current recycling models—while considerable—are inspiring innovative ways to address the issue.

“California is no different than the rest of the United States in that regard, but not being able to export … most of our stuff to China is obviously a problem,” David Colgan, a sustainability author and communications specialist at UCLA’s Institute of the Environment & Sustainability, told The Epoch Times.

“It’s kind of forcing us to rethink how we deal with it here in California and across the United States.”

One reason why critics have sounded the alarm on a recycling emergency is China’s 2018 ban on importing materials such as mixed paper (i.e., office paper, junk mail, magazines) and many plastics.

According to Lance Klug, a spokesperson for California’s Department of Resources, Recycling and Recovery, known as CalRecycle, China’s ban was a progression of stricter policies that culminated in their decision to discontinue accepting certain materials.

“They put such a low contamination threshold,” he said. “Essentially, if you were sending them Plastic #1 (polyethylene terephthalate, known as PET), it had to be entirely Plastic #1—no bottle caps made of Plastic #2 (high-density polyethylene, known as HDPE), no staples in the papers—stuff like that.”

“So really strict contamination standards kind of forced California and the rest of the world to kind of … reevaluate what we’ve been doing,” he added.

“All the countries are following suit with what China has in terms of a 0.5 percent contamination level,” Kharrat told The Epoch Times. “You need additional technology to help meet these new standards.”

“The local jurisdictions need to invest more in educating the public in what’s recyclable and what’s not,” he said. “You’ve got this ‘wish recycling,’ if you will, where people throw things into their blue bin wishing that everything [will be] recycled. Well, that’s not the case. There’s not a market for everything you put into these bins.”

When asked if he thinks California is facing a recycling crisis, Kharrat said, “Not necessarily. Recycling isn’t going away, it’s just going to cost more.”

“Recyclables are essentially commodities,” Klug explained. “I don’t know if a lot of people realize that.”

“Recycling is only recycling if somebody wants to buy materials to manufacture new products,” he added. “Recycling isn’t just throwing it in the bin—that’s sorting, [and] that’s a key part of the recycling process, [but] recycling only happens if someone wants to purchase that material and make something new from it.”

“We need some technological improvements,” Colgan, who co-authored the book “The Green Bundle: Pairing the Market with the Planet,” said. “We need to figure out new ways of recycling … what they are now trying to do is create a completely circular economy.”

This is the precise goal that Miranda Wang, co-founder and CEO of BioCellection, is aiming toward.

Wang, who grew up in Vancouver, Canada, began pursuing her passion for sustainability at a young age.

“We started working on developing technologies to solve the plastic problems since we were in eleventh grade,” she said, referring to her friend and co-founder Jeanny Yao.

Though she grew up with a system of recycling that emphasized residents’ responsibility, a field trip to a local recycling facility caused her to realize the complications of the flawed recycling process.

“I grew up in a system where I believed recycling was really important and that if we were to sort [the recyclables], that all this should be handled by somebody,” she said. “[After] touring these facilities when I was in high school, I realized that that wasn’t actually happening.”

“It’s not really about whether the consumers sort it—although that does help,” she added. “It’s about the downstream markets of these materials. There are no markets … that turn them into valuable products. Then, it doesn’t really matter whether we’re collecting these things are not.”

As a result, Wang’s company BioCellection is creating a market-driven solution to the plastic problem by focusing specifically on plastics that are currently perceived to be unrecyclable.

“On a simple level, [plastics are] carbon atoms hooked together [into] synthetic structures that are very difficult to access,” she said.

Wang’s company has developed a process that allows them to access those atoms and decompose the structures by funneling the carbons that are “trapped in this linear material … into circular materials.”

This methodology goes beyond elevating unrecyclable materials into higher value applications. Wang is working toward designing virgin grade plastics that can be recycled at the end of their use as well.

“We build them up to much higher value plastics that would be used to build a car or an airplane,” she said. “These are plastics that are going to be worth more than 10 times or 100 times more. That’s how we … justify the cost of developing this new technology.”

Colgan believes this is the kind of innovation that could inspire a turning point for the recycling dilemma.

“They’re trying … to create a completely circular economy where, not only do they break down these previously unrecyclable plastics, but they turn them into materials that can turn a profit,” he said. “That’s the kind of technological fix that we will need. We should attack this problem at all levels.”

Chris Karr
Chris Karr is a California-based reporter for the The Epoch Times. He has been writing for 20 years. His articles, features, reviews, interviews, and essays have been published in a variety of online periodicals.