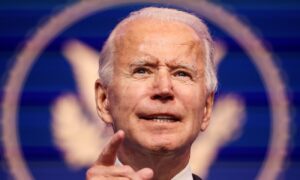 Biden Is Wrong: A $15 Minimum Wage Would Hurt Far More People Than It Would Help
0
Share Now
TelegramFacebookTweetEmailTellMeWeReddit
Copy Link 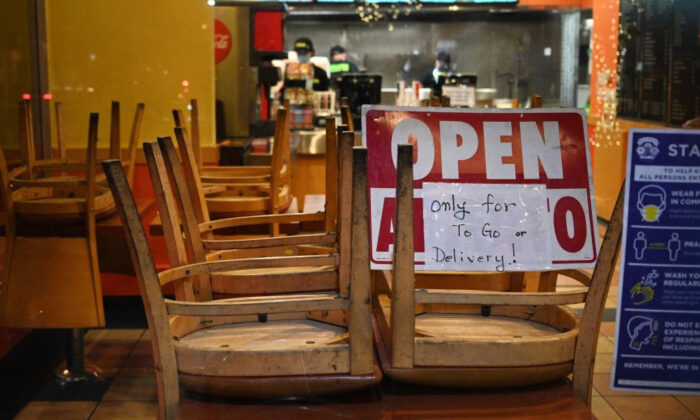 Employees work in a restaurant open for to-go or delivery orders only in Burbank, Calif., on Nov. 23, 2020. (Robyn Beck/AFP via Getty Images)
US News

Minimum wage in California has been increased to $14 per hour, as new business and labor laws come into effect Friday.

The change applies to businesses that have 26 or more employees. Businesses with 25 or fewer employees are required to increase the minimum wage to $13 an hour.

Gov. Gavin Newsom said in a statement announcing the change that he wanted to ensure all Californians to benefit from the economic recovery.

“Not allowing this increase to go forward will only make life harder for those Californians who have already borne a disproportionate share of the economic hardship caused by this pandemic,” Newsom said. “Many of them are on the front lines of the pandemic, providing child care, working in our hospitals and nursing facilities and making sure there’s food on grocery store shelves.”

California has been incrementally raising the state’s minimum wage annually since 2017, with a goal of reaching $15 by 2023. Though some legislators and business organizations have urged Newsom to halt this year’s scheduled minimum wage hike in order not to add burden on already struggling small businesses, he has refused to do so.

While Newsom expects an economic recovery, business organizations such as National Federation of Independent Business (NFIB) warn that increasing minimum wage would discourage businesses from bringing back workers they have furloughed during the pandemic, making it harder for the economy to recover.

“It has to be asked if the governor even cares about small business,” said John Kabateck, NFIB’s state director for California. “Small businesses in California are dying, so what is the Golden State doing to stanch the flow of the carnage? It hits them with increased costs in paid family leave programs, increased workers’ compensation premiums via rebuttable presumption, zero fixes to a deeply flawed independent contractor law, and now a scheduled increase in minimum wages.”

“We have an official economic policy in California, and it’s to completely annihilate small businesses,” Kabateck said. “It’s as if they are expecting the COVID-19 crisis to vanish tomorrow.”

According to the Labor Department, no state has so far established a $15 minimum wage, although the District of Columbia pays its workers a minimum wage of $15. The states of Washington and Massachusetts had the highest state minimum wages in 2020 at $13.50 an hour and $12.75 an hour, respectively.

A number of states, including California, Connecticut, Florida, Illinois, Maryland, Massachusetts, New Jersey, and New York, have pledged to raise the minimum wage to $15 in the coming years.