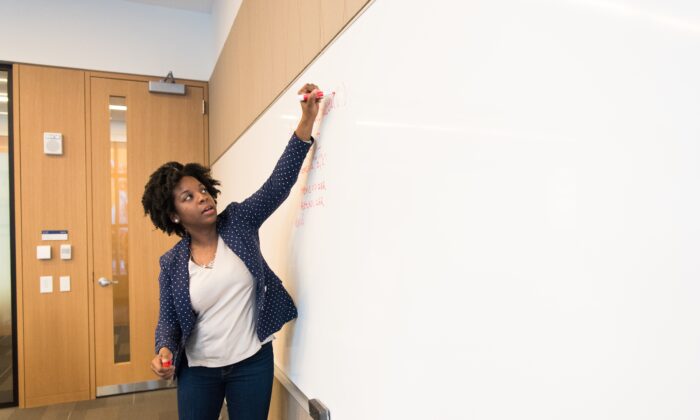 A file photo of a teacher writing on a white board. (Christina Morillo/Pexels)
By Chris Karr

LOS ANGELES—California’s big cities are the worst in the nation for teachers being unable to afford housing in their school districts.

Many of them say the long commutes erode their quality of life and eat away the time they could dedicate to their students. “A lot of times, I’m tired or I just don’t have the energy … to put into everything,” David Davenport, a French teacher in the Bay Area, told The Epoch Times.

He commutes 90 minutes each way daily, because living closer to the school would “pretty much [nix] my whole check. I can’t afford that because it doesn’t leave me anything for food or a car or anything.”

In an emerging statewide trend, voters in four districts are deciding whether to build affordable housing for teachers by increasing local property taxes.

These measures were on the March 3 ballot, and although mail-in votes are still being counted in some districts, it’s clear the results have been close overall.

In Soledad Unified School District, a teacher housing measure has failed; it fell only 1.4 percent short of the needed 55 percent approval.

In Patterson Joint Unified, a similar measure has effectively been defeated—with only 34 percent approval now the votes still being counted are not going to pass it.

In Chula Vista, a measure is poised to pass with 55.4 percent approval, though votes are still being counted.

In East Side Union, it’s anybody’s guess. A measure there currently has 52 percent approval.

This year’s results may determine the strength of the trend, and whether it has the momentum to spread.

Where Rent Costs 108% of a Teacher’s Salary

San Francisco is the worst city in the nation for the share of a teacher’s salary spent on rent or mortgage. Mid-career teachers there spend about 67 percent of their income on housing, according to an Aug. 2019 study by Zillow Research.

It’s worse for teachers just starting in the profession. In San Jose, which is a close second for the worst city, the median rent consumes about 108 percent of a typical starting teacher’s salary.

San Jose’s East Side Union is the one district where a teacher housing measure, Measure J, is still up in the air.

Mark Hinkle, president of the Silicon Valley Taxpayers Association, is against it.

“The educational system is supposed to teach kids how to learn and they’re not doing a terribly good job at that. So why would we add to their responsibility being landlords?” Hinkle told The Epoch Times.

“I can see all sorts of landlord-related issues coming up that, frankly, the school district is not equipped to handle,” he added. He thinks the district should give teachers a pay raise instead. “[That way, teachers] can choose to rent or buy or share an apartment or townhouse. Why would you want to be a landlord?”

One of the benefits of being a landlord, according to the district, is revenue from rent. Even though the units would be rented below market value, the district expects the apartment complex to generate about $1 million to $2 million in revenue.

The offer of housing has enticed some teachers to work for school districts, helping with the struggle to attract and retain teachers.

One of the reasons Davenport took a job with the Jefferson Union High School District in the Bay Area “was because they were working on employee housing.”

“So [I was] hoping that in like a year or two the apartments will hopefully [be close to] what I’m paying right now,” he said. Davenport, 49, has been teaching for 20 years and currently spends about half of his net income on rent living more than 50 miles from his school.

Being able to live in the community where he teaches will make a huge difference for him and his students, he said. Currently, he’s unable to attend many school events and participate in various programs.

“It’s important to have the teacher be part of the community,” he said. “My big goal is to live over here and be closer. I care about my students and the community that they’re a part of. To be able to afford housing and be here … would bring a lot of joy, I think, to my life. And I know I would do a better job.”

Feb. 5 was a big day for Davenport. He and his colleagues, armed with shovels, broke ground on Jefferson Union High School District’s first building dedicated to affordable teacher housing. The four-story development will provide 120 units to teachers and staff members.

Although similar teacher housing initiatives have been popping up all over the United States in recent years, Jefferson Union is the first to use funding exclusively from a bond passed by local taxpayers, according to EdSource.

The four March ballot measures followed suit, and the trend may continue, depending on how successful this pilot project is.

The bond measure in Jefferson Union passed by only a narrow margin in 2018; it needed 55 percent approval to pass and it got 55.8 percent.

Nationally, teachers are “cost burdened” as defined by the U.S. Department of Housing and Urban Development.

In 2017, a homeless math teacher in San Francisco named Etoria Cheeks made headlines, raising awareness of the heightened problem in California. Cheeks’s case prompted then-Mayor Ed Lee to dedicate $40 million in city funds to a teachers’ residence. That project is expected to be completed late 2022.

In January, the San Francisco Unified School District approved a resolution setting the goal of building at least 550 units of affordable educator housing by 2030.

But as for the four March ballot measures that ask voters to tax themselves to pay for such units—that may be a different kettle of fish.

Measure E, defeated in Soledad Unified School District in Monterey County, would have cost local taxpayers $30 for every $100,000 of assessed property value, for $11.5 million total.

Measure N, effectively defeated in Patterson Union in Stanislaus County, would have cost taxpayers $40 for every $100,000, for $32.5 million total.

Measure J, which is still too close to call in East Side Union in Santa Clara County, would cost taxpayers $30 per $100,000, for $60 million total.

An editorial by the Mercury News Editorial Board suggested East Side Union residents have already paid too much in property tax toward other bonds. School construction bonds in that district have totaled $1.1 billion in the past 20 years.

“There’s a limit to how much property owners should be asked to pay in taxes,” it reads.

Objections in other places have revolved around the details, such as the precise location for the housing.

For example, when San Jose Unified School District considered teacher housing in 2018, the plan was to relocate two schools and build the housing on those properties. A group of residents started a petition on Change.org to protest the schools’ relocation.

When Santa Clara County Supervisor Joe Simitian floated the idea of building teacher apartments on county-owned land in 2018, some questioned whether teacher housing was a higher priority than affordable housing for other people.

An editorial by the Palo Alto Weekly editorial board titled “Caution on Teacher Housing,” stated at the time: “We’d like to see clear evidence of … why teacher housing should be a higher priority than other subsidized housing when considering the re-purposing of limited public property.”

In Jefferson Union, where Davenport is hoping to move in when the teacher housing project is completed in 2022, some details remain unclear.

“The part that most people have questions about is how they’ll determine who gets to live there, right?” Davenport said. “Because we don’t know 100 percent until it actually happens what the demand will be.” Demand might exceed the number of units, he said.

April Hawkins, director of communications and staff housing for the district, told The Epoch Times there is currently an “interest list” of teachers who want the housing. “We’re going to be doing a lottery system down the road and we’re still working out all the details of that,” she said.

Hawkins said the housing is sorely needed. A number of teachers and faculty members are “taking on two jobs or making these really ridiculous commutes, so that’s really going to free up their time to be able to focus on their students,” she said.

“We hear so many stories about it. I can’t say every teacher, but most of the teachers that … I work with are feeling the strain of that. I mean, everybody feels the strain of the housing problem in the Bay Area, even management.”

Chris Karr
Chris Karr is a California-based reporter for the The Epoch Times. He has been writing for 20 years. His articles, features, reviews, interviews, and essays have been published in a variety of online periodicals.