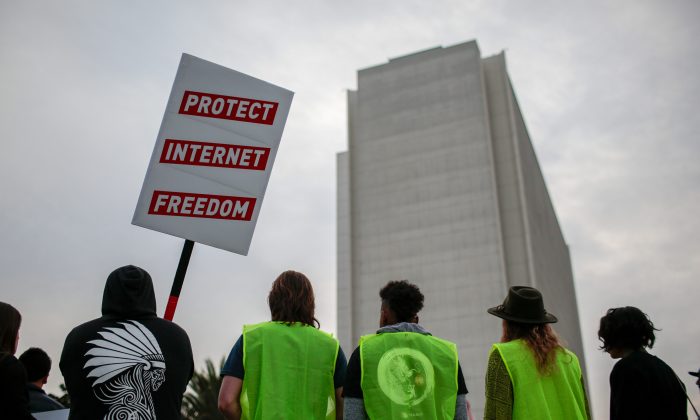 WASHINGTON—The state of California on Oct. 26 agreed not to enforce its own state net neutrality law until a final court decision on the Trump administration’s decision to overturn the 2015 Obama-era open internet rules.

The move likely means the California net neutrality law, which was set to take effect on Jan. 1, now will be on hold for a year or longer. The law has been challenged by the U.S. Justice Department and trade groups representing providers including AT&T Inc., Verizon Communications Inc., and Comcast Corp.

A federal appeals court set oral arguments for Feb. 1 on the administration’s net neutrality reversal. California agreed it would not seek to enforce its law until that court’s decision and any potential review by the U.S. Supreme Court.

A federal judge on Oct. 26 approved an agreement between California, the Justice Department, and the trade groups to delay implementation and the legal challenges to the state law.

Federal Communications Commission Chairman Ajit Pai, who led the effort to overturn the Obama era net neutrality rules, said in a statement California’s “substantial concession reflects the strength of the case made by the United States earlier this month. It also demonstrates … there is no urgent problem that these regulations are needed to address.”

California Attorney General Xavier Becerra said the decision was “intended to put us in the best position to preserve net neutrality for the 40 million people of our state. We are fighting the Trump Administration’s attempt to repeal net neutrality in the D.C. Circuit Court and we will vigorously defend California’s own net neutrality law.”

In December, the FCC said in repealing the Obama-era rules that it was pre-empting states from setting their own rules governing internet access—an issue the federal appeals court is expected to address.

The FCC order reversed rules barring internet service providers from blocking or throttling traffic or offering paid fast lanes, also known as paid prioritization. A group of 22 states and the District of Columbia have sued to overturn the repeal.

The four trade associations that sued to block the law said California’s decision not to enforce the law “is a win for consumers that will allow continued innovation and investment while these deliberations continue.” The groups also filed suit last week against Vermont over a separate state net neutrality law.

The Trump administration rules were a win for internet providers but opposed by companies such as Facebook Inc., Amazon.com Inc., and Alphabet Inc.

The FCC handed sweeping powers to internet providers to recast how Americans use the internet—as long as they disclose any changes. The new rules took effect in June but major providers have made no changes in internet access.

U.S. Attorney General Jeff Sessions said in September in a statement that the “the California legislature has enacted an extreme and illegal state law attempting to frustrate federal policy.”