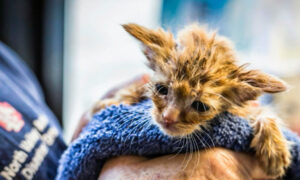 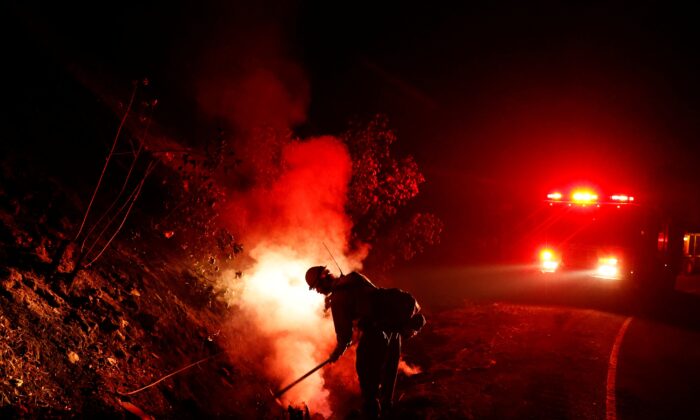 A firefighter mops up a hot spot while battling the Glass Fire in Calistoga, Calif., on Oct. 2, 2020. (Stephen Lam/Reuters)
Northern California

CALISTOGA, Calif.—California fire crews deploying water-dropping helicopters made a defensive stand on Friday against flames raging in the foothills of the Napa Valley wine region as forecasts called for a return of dangerous high winds and hot weather this weekend.

More than 2,500 firefighters were battling the Glass Fire, which broke out last Sunday near the resort community of Calistoga, some 75 miles (120 kilometers) north of San Francisco, and has already destroyed 248 homes or other structures.

Among them were the stately Chateau Boswell Winery north of Napa, and a farmhouse at the landmark Castello di Amorosa winery, where the castle-like main building survived.

Thick smoke poured over deserted Napa Valley communities that would typically be bustling with visitors for the grape harvest.

“Everyone is hunkered down, it’s very, very quiet,” said Kari Corte, who works at the Ghost Block Estates Winery outside Oakville. She was in her home in Zinfandel, the fire burning less than 3 miles to the north.

“I’ve got my bags packed and I’m ready to go,” Corte said, recalling that in 2017 she had been forced to flee the town of Atlas Peak community during another bad fire year for the wine country.

At some wineries employees stood guard over buildings and crops with bulldozers and water tankers, hoping to serve as a desperate last line of defense if flames made a run out of the foothills.

The Newton Vineyard winery went up in flames on Wednesday, according to a Reuters photographer, who saw rivulets of red wine mixed with ash flowing down its main access road.

Vintners in the area fear the smoke has spoiled much of this year’s vintage.

Rain in the Forecast

Roughly 52,000 residents were under evacuation orders at least through the weekend, with the fire at only 5 percent containment, according to the California Department of Forestry and Fire Protection, or Cal Fire.

The National Weather Service issued red flag warnings for high winds over the next two days.

Rain storms are forecast for the region at the end of next week and firefighters hope they could keep the blaze from entering populated areas again until the showers came.

“It’s going to be a big firefight for us in the next 36 hours,” Cal Fire operations section chief Mark Brunton said on Thursday. Resources were stretched due to the high number of fires burning across the state, he said.

Some 200 miles (320 kilometers) to the north, crews have made significant progress against the Zogg Fire in the foothills of the Cascade mountain range. Containment had reached 46 percent as of Friday afternoon, up from 26 percent a day earlier.

Four people have been killed in the Zogg fire, which has also has destroyed nearly 150 buildings near the town of Redding. No casualties have been reported in the Glass Fire.

Overall, at least 30 people have died since mid-August in a devastating string of wildfires across the U.S. West that have been stoked by bouts of extreme heat, winds, and dry-lightning storms.

California fires have scorched nearly 6,100 square miles acres (15,800 square kilometers) since January, more than three times the land mass of Delaware and far exceeding the acreage burned during any previous year on record.