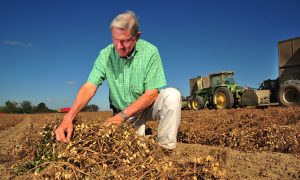 Peanuts, Mushrooms, and Blueberries: US Crops That Aren't Affected by California Drought
0 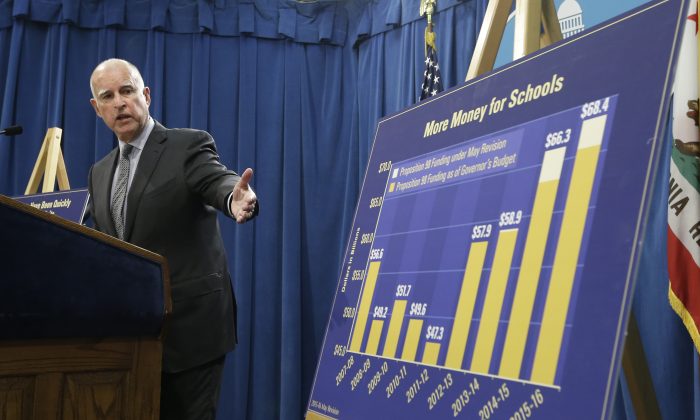 In this May 14, 2015, photo, California Gov. Jerry Brown gestures to a chart showing the increase in education spending as he discusses his revised state budget plan during a news conference at the Capitol in Sacramento, Calif. (AP Photo/Rich Pedroncelli)
US

SAN FRANCISCO—While the Common Core education standards provoked political backlash and testing boycotts around the country this year, the state that educates more public school children than any other — California — was conspicuously absent from the debate.

Gov. Jerry Brown and California’s elected K-12 schools chief are united in their support of the embattled benchmarks. The heads of the state’s teachers’ unions, universities and business groups are on board, too.

More than one-quarter of the 12 million students who were supposed to take new online tests linked to the standards this spring were Californians, but the technical glitches and parent-led opt-out campaigns that roiled the exams’ rollout elsewhere did not surface widely here.

“I’m glad it’s not us,” state Superintendent of Public Instruction Tom Torlakson, a former high school science teacher and state lawmaker, said of the anti-Common Core sentiment that has put his peers in many other places on the defensive.

The prevailing equanimity may stem most from what the state did not do, Common Core opponents and advocates in California agree: tie student test scores to teacher evaluations.

The 2012 decision cost the state $49 million from the federal Race to the Top grant program, as well as a reprieve from the sanctions in the 2001 No Child Left Behind law for schools defined as low-performing based on test results.

But the refusal scored the governor and state education officials points with teachers that staved off dissent over the new standards, California Federation of Teachers President Joshua Pechthalt said.

“When you don’t attach those high-stakes tests, then you’ve really cut much of the opposition,” Pechthalt said.

California also owes its comparative calm in part to the lock like-minded Democrats have had on statewide offices and the Legislature since the start of 2011, mere months after the state school board adopted the voluntary math and language standards with approval from an initially ambivalent Republican Gov. Arnold Schwarzenegger. GOP voters and lawmakers who saw the Obama administration-backed framework as federal overreach were the Common Core’s earliest critics.

“In smaller states, people can organize and say we don’t want this and go to the governor and superintendent and see results,” state Sen. Sharon Runner, a member of the GOP minority in Sacramento, said. “In our state, there are millions and millions of students … But there is no big swell or group out there that is trying to stop Common Core.”

More money in school coffers hasn’t hurt the Common Core cause either. Since the start of the 2013-14 school year, Brown and the Legislature have put $1.5 billion toward the technology and teacher training that school leaders argued were needed to bring the new standards into classrooms. The governor has proposed spending another $3.5 billion on Common Core implementation next year.

“Teachers are the first-line communicators with parents, so when teachers are getting what they need, they are communicating something that is more positive,” California State PTA Vice President for Education Patty Scripter said.

California officials stood firm in the face of a threat from U.S. Education Secretary Arne Duncan last year to withhold $1.5 billion in school funding if the state suspended its old pencil-and-paper standardized tests a year early and only administered the computer-based Common Core tests on a practice basis.

State Board of Education President Michael Kirst, an education professor at Stanford University, thinks the trial run may explain why this year’s testing season appears to have gone relatively well.

It gave schools a chance to test their equipment, students a chance to get familiar with the format and eliminated the charges of excessive testing that have dogged some states.

“We have really gone our own way with (Washington), and combined with the political nature of the state, the unified state leadership, and not a lot of pushback from the Republican Party, we have preserved the momentum,” Kirst said.

The stay-the-course strategy still faces some potential stumbling blocks. Already, small pockets of resistance have emerged over the amount of time younger students are spending in front of computers and the way the standards de-emphasize or eliminate the study of algebra in middle school.

“The parents, when they realize what is going on and particularly in what I would consider the affluent parts of the state, they will be out there with pitchforks,” said Ze’ev Wurman, a software engineer who served on the state commission that evaluated the Common Core before its 2010 adoption and has been a vocal critic.

Why Record Heat Is Burning California to a Crisp

In anticipation of this summer’s release of the first Common Core-based test scores, state officials and local administrators are warning parents not to expect too much. The results for both individual schools and students may appear disappointing, they say, because the new exams were designed to be more challenging and are taken on computers instead of with paper and pencils.

The state superintendent, meanwhile, has started referring to the revised benchmarks as “California Standards” instead of Common Core.

“It’s tainted in some way,” he said of the term Common Core. “We are doing it the right way, and I call it the California Way — sensible, gradual and collaborative.”