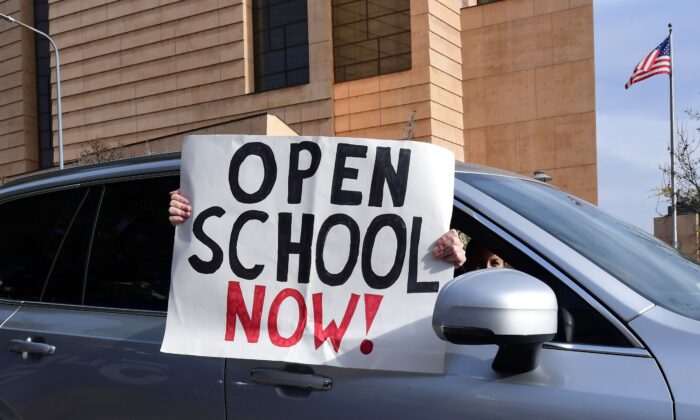 A person in a passing vehicle holds a sign calling for schools to reopen, during an “Open Schools Now” rally on Feb. 15, 2021, in Los Angeles. (FREDERIC J. BROWN/AFP via Getty Images)
Northern California

Opposition research is the practice of collecting information on a political opponent or other adversary that can be used to publicly discredit or otherwise weaken them.

Then after a principal was accidentally CC’d, the “damage control” was asking him to illegally delete the email.

“The public records request came from parents down in San Diego at this particular school district unrelated to this incident that we came across,” said Zachreson. “In gathering documents for this, they noticed that their particular organization, Parent Association, was targeted by the California Teachers Association.”

The email was initiated by CTA researcher, Ann Swinburn, to an activist parent arm of the local union.

In the email Ann says, she is “currently doing some research into the various ‘reopen’ groups around the state.”

The emails show that a principal was accidentally cc’d into the email chain. Two individuals by the names Holly and Michele then talked about “damage control” and asking the principal to delete the email.

“Before she deleted [her account], even through some archives, we see comments of her making, essentially to that point over and over again, that she is trying to find out these groups. … ‘This is right-wing dark money groups that are funding this, and we have got to find out the pattern and find out who’s funding them, and ultimately discredit them,’” said Zachreson.

The public records request and revelation came after Parent Association successfully sued the state of California to reopen schools in March 2021.

The lawsuit challenged a lawsuit the local San Diego Unified School District union filed in December 2020. With support from CTA, the union had sued the district to keep schools closed.

According to Zachreson, CTA is very involved politically. The association has around 310,000 members and is one of the most powerful teachers unions in the state.

“A year and a half ago, when we were trying to get schools open, we were called racist; we were called white supremacists,” said Zachreson. “We were called all sorts of names to try to discredit that fact that we just wanted our kids in schools.”