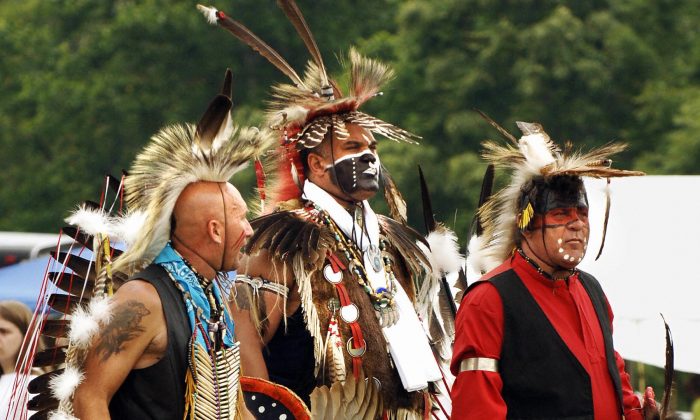 A teacher at a Riverside, California school has been placed on administrative leave after a video emerged showing her wearing a faux Native American headdress while dancing and chanting in front of her class.

Video footage of the clip, which was filmed in the classroom and shared on Twitter, shows the John W. North High School teacher waving her arms in the air during a math class while wearing a headdress made of paper.

She can repeatedly be heard chanting “SohCahToa”, a mnemonic device used to remember the three basic trig ratios used to solve for missing sides and angles in a right triangle; sine, cosine and tangent.

At one point, the video shows the teacher standing on desks at the back of the classroom and shouting out the chant before making references to a “rock god” and “water goddess.”

“The teacher’s behavior was highly inappropriate and offensive,” Assemblymembers said in a statement on Thursday.

“It is damaging and disheartening to see Native American and indigenous culture represented in such a trite and insensitive way. However, this is not an isolated incident, as such teaching practices, even in math classes, have been used across the nation. It is time that we stop this behavior.”

Assemblymembers noted that the state of California made ethnic studies a required course across California high schools just weeks ago.

“Unfortunately, for students of color, moments such as the one at John W. North High School are the few in which their heritage is represented in the classroom, despite how inaccurate and wrong they are. We need to ensure that students learn about themselves in positive, accurate, and appropriate ways,” the statement continued.

“As members of the legislature and members of our community, we are fully committed to working with Riverside Unified School District to make sure that appropriate actions are taken and incidents like this never happen again.”

On Thursday morning, the Riverside Unified School District issued a statement confirming the video is from a district teacher and that she has been placed on leave pending an investigation.

“A recording of one of our teachers has been widely circulated on social media. These behaviors are completely unacceptable and an offensive depiction of the vast and expansive Native American cultures and practices. Her actions do not represent the values of our district. The teacher has been placed on leave while the District conducts an investigation,” the statement reads.

“The Riverside Unified School District values diversity, equity and inclusion, and does not condone behavior against these values,” the statement continued.

The district noted its commitment to implement “inclusive practices and policies that honor the rich diversity of our district and the greater region” and said it will be working with its students, families, staff, and community to regain the trust of the school.

The district did not identify the teacher.

The Epoch Times has contacted the Riverside Unified School District for comment.