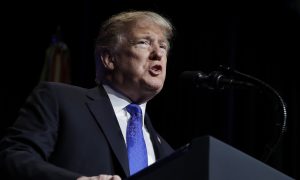 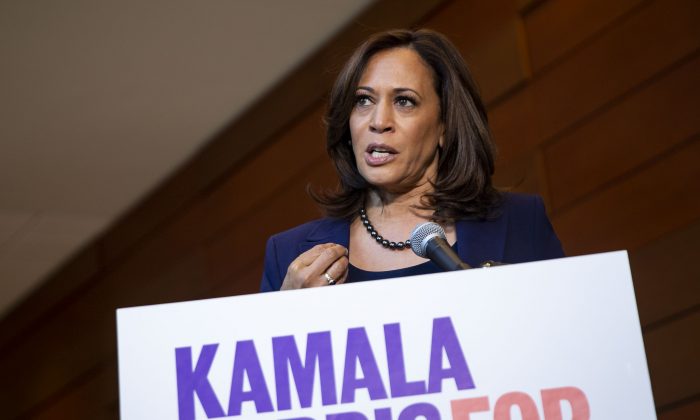 Sen. Kamala Harris (D-Calif.) speaks to reporters after announcing her candidacy for President of the United States, at Howard University, her alma mater, in Washington on Jan. 21, 2019. Harris is the first African-American woman to announce a run for the White House in 2020. (Al Drago/Getty Images)
Politics

Sen. Kamala Harris (D-Calif.) announced Jan. 21 that she is running for president in 2020, the latest Democrat in a growing crowd of hopefuls seeking to challenge incumbent President Donald Trump.

Harris, who’s been considering running for months, told ABC’s Good Morning America that “I’m running for president of the United States, and I’m very excited about it.”

At the same time as her appearance on the show, the first-term senator released a campaign video on Twitter outlining her platform’s goals. In the nearly one-minute video, she said, “Truth. Justice. Decency. Equality. Freedom. Democracy. These aren’t just words. They’re the values we as Americans cherish. And they’re all on the line now.”

Her presidential bid is the latest in a wide field of possible Democratic candidates, some of whom have already announced bids, and others who are still mulling the possibility. As of writing, Harris is the first African-American woman to announce a 2020 presidency and the third female candidate so far. Sen. Elizabeth Warren (D-Mass.) and Sen. Kirsten Gillibrand (D-N.Y.) have announced their own presidential exploratory committees.

Harris was elected to the Senate in 2016 after six years as California’s attorney general. She is widely seen as a progressive member of the Senate and gained some attention among Democrats after she grilled Trump’s judicial nominees.

Last year, Harris had rallied for Democrats on a trip to Iowa during the midterm elections. That trip was widely seen as her testing the waters for a potential run.

Michael Ahrens, a spokesperson from the Republican National Committee, says Harris is “out-of-touch” and doesn’t have the qualifications for president.

“Kamala Harris is arguably the least vetted 2020 Democrat, but it’s already clear how unqualified & out-of-touch she is,” he said on Twitter. “Her hometown paper says she was a bad manager as attorney general, & all she has to show for her brief time in the Senate is a radically liberal voting record.”

Speaking to ABC, Harris outlined her selling points as president.

Harris, who has an Indian mother and a Jamaican father, is planning a formal campaign launch in Oakland, California, on Jan. 27. Meanwhile, other high-profile Democrats such as Hawaii Rep. Tulsi Gabbard and former San Antonio Mayor Julian Castro have both announced their intentions to run for president.