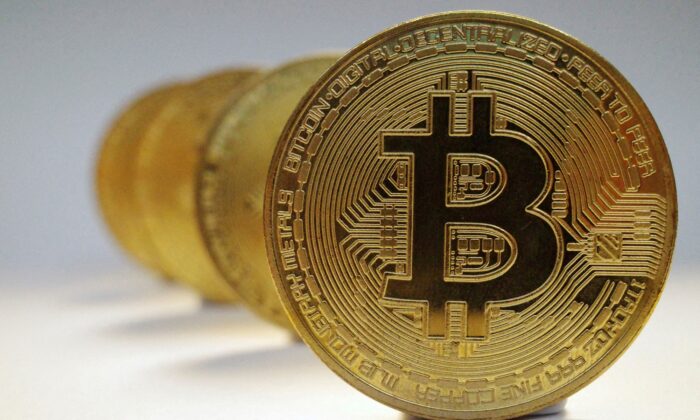 A representation of the virtual cryptocurrency bitcoin is seen in this picture illustration taken on Oct. 19, 2021. (Edgar Su/Reuters)
Southern California

California Seeks to Use Cryptocurrency as Legal Tender

SACRAMENTO—Californians might be able to use cryptocurrencies to pay for groceries, rent, or driver’s license renewal as early as next year, after two bills were introduced recently to make digital currency an acceptable form of payment.

Both will signal the state is “open for business” in the crypto market, said Ian Calderon, a consultant and former majority leader of the California State Assembly who is advising both lawmakers with the legislation.

However, Calderon said implementing cryptocurrency as legal tender faces legal ambiguity and a lack of certainty for local cities. As a result, he said, some may want to have pilot programs accepting virtual currencies in place first if the legislation passes.

As it stands, the U.S. Constitution allows states to determine what represents their legal tender.

Calderon said the bill would create guardrails that allow for consumer protection and regulations that make it clear how public and private sectors can interact with virtual currency.

According to Calderon, if the law passes, governmental agencies and businesses accepting crypto could immediately choose to convert it into regular U.S. dollars or keep it as virtual money to hold onto or reinvest in crypto markets.

“It’s important that we’re making this effort in California because of the national implications it will have,” he said. “The goal here is to have a national model piece of legislation that can work anywhere in the country.”

Currently, the only other state in the nation pursuing having cryptocurrency considered legal tender is Arizona.

President Joe Biden signed an executive order March 9 calling for “responsible development” of digital assets. Issues of concern to be addressed, according to the order, include ensuring consumers are protected from systemic financial risks; how to make crypto markets less volatile; and how to prevent the use of crypto for illegal activity.

Biden’s order cites a Time magazine survey from last November stating cryptocurrencies surpassed a $3 trillion market. In addition, approximately 40 million Americans—or 16 percent of the population—according to the order, have invested in, traded, or used cryptocurrency since bitcoin emerged in 2009, and over 100 countries have either explored or piloted their own so-called Central Bank Digital Currencies, which are like crypto, but are issued by a central bank, like the U.S. Federal Reserve, instead. Crypto is not tied to any bank whatsoever.

Dennis Porter, a Portland-based political strategist and bitcoin advocate, who is also working to advance the legislation, said such government-controlled digital dollars are the opposite of the goal of today’s bitcoin.

Porter told The Epoch Times humans need a form of money they can store value in without “debasement from governments.”

“Bitcoin is permissionless and censorship-resistant,” he said, referencing Canadian Prime Minister Justin Trudeau’s recent freezing of bank accounts of those associated with the Freedom Convoy protest in Ottawa last month.

“I’m hoping that our government will focus on building in privacy aspects, not using a tool to control when and where people can spend money, and I think bitcoin is the ultimate way to do that.”

Ultimately, Porter said he hopes the country heads “in the right direction” with digital currencies citing examples like El Salvador, which recently became the first nation to adopt bitcoin as the national currency, as opposed to China’s pro-central bank digital currency stance.

“We should be encouraging money that can be used that has true equality and equal access,” he said.