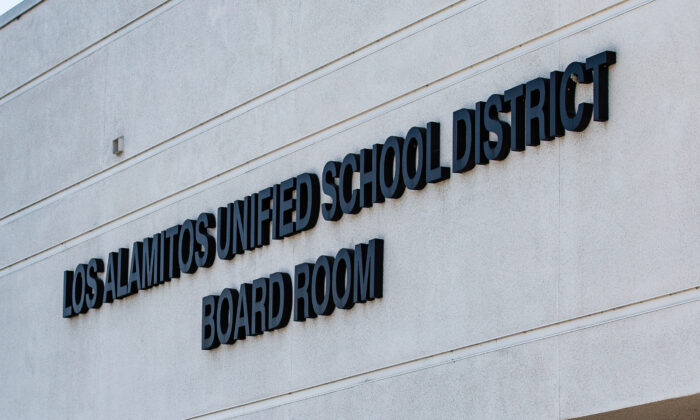 LOS ALAMITOS, Calif.—A group of parents is drawing attention to an overnight science camp that allegedly allowed their fifth-grade daughters to sleep in the same cabins with biological male camp counselors who use “they/them” pronouns.

Liz Sanzaro, a mother of a fifth-grade daughter who attended Camp Pali, an outdoor science school in Running Springs, California, from Feb. 1–4, through the Los Alamitos Unified School District, found out her daughter may have been placed in a cabin with a biological male who identifies as non-binary after a report from KTLA recently aired.

According to KTLA, parents said their fifth-grade girls told them some of the biologically male counselors at Camp Pali who use they/them pronouns spent three nights sleeping in cabins with the young girls.

“I never thought in a million years I would have to ask my daughter whether or not a male camp counselor was sleeping in her room with her because it seems like such a basic requirement that it would be the same gender as my daughter sleeping in the cabin,” Sanzaro told The Epoch Times.

When her daughter returned home from camp, she said the counselors taught campers how to identify their pronouns like he/him, she/her, or they/them—a conversation that was yet to be discussed between Sanzaro and her 10-year-old daughter.

“Honestly, my daughter did not understand,” she said.

Suzy Johnson, a parent whose daughter also attended Camp Pali, told The Epoch Times that Los Alamitos Unified School District never informed parents that the camp allowed adults of the opposite gender to sleep in the same cabin with their child.

“It’s mind-boggling and outrageous,” she said.

Johnson also said when her daughter returned home from camp, she and the other young girls claimed their counselor, who identified as she/her, “emotionally abused” the campers in her cabin.

They said the counselor threatened to pull them out of their bunks by their feet or pigtails—in some cases—if they didn’t get out of bed when asked, turn off the water if they showered longer than five minutes, and yelled at them if they spoke to each other after the 9:45 p.m. “lights out” bedtime.

Moreover, if a student misgendered a counselor, Johnson said, students were reprimanded.

According to Camp Pali’s website, cabin leaders must pass an initial screening process with a comprehensive background check, including live scans and drug testing.

Emmi Teige, assistant director of Camp Pali, told KTLA, “Per California law, we place staff in cabins they identify with.”

In a statement, an attorney for Pali Institute, which owns Camp Pali, told Fox News, “To our knowledge, there have been no biologically male counselors in shared cabins with female students at Pali Institute. While counselors may have used the pronouns, they/them, the use of these pronouns is not restricted to biological males. Biological females also use those terms.”

“We are aware of the laws, and we have to abide under those laws,” Nichole Pichardo, communications director for Los Alamitos Unified School District, told the Epoch Times. “That’s consistent for any school activities whether students are participating during the day, on field trips, or overnight.”

Pichardo said no allegations of sexual misconduct were conducted by the district staff or the staff at Camp Pali.

However, the district is currently investigating the parents’ concerns, and communication to parents about gender non-discrimination laws will likely be included going forward.

In a statement sent to all Los Alamitos Unified School District’s fifth-grade families, superintendent Dr. Andrew Pulver wrote, “Pali Institute’s Outdoor Education program complied with legal requirements in ensuring that individuals participated in any sex-segregated facilities in accordance with their gender identity. This may or may not be the individual’s gender assigned at birth. Privacy rights protect disclosure of information about an individual’s gender to the public, and thus, we do not have information to share about other individuals in your student’s cabin, other than to clarify that all individuals in the ‘female’ cabin primarily identified as female, and all individuals in the ‘male’ cabin primarily identified as male. To the extent an individual is non-binary, the individual must select a primary gender for the purpose of use of single-sex facilities.”

A spokesperson from Camp Pali did not respond to a request for comment by the press deadline.