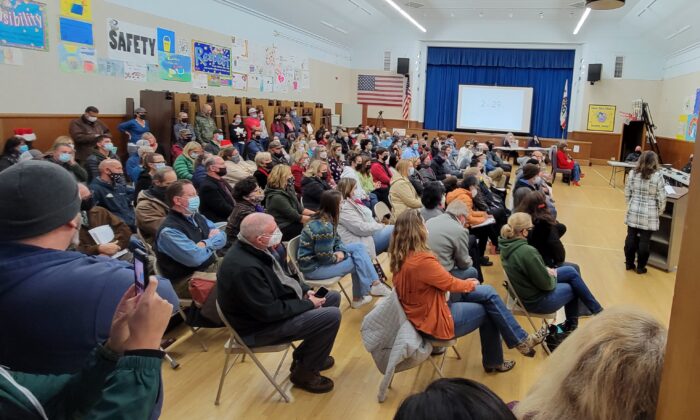 A crowd of more than 150 people packed a school board meeting in Salinas, Calif., on Dec. 15, 2021. (Courtesy of Josey Schenkoske)
Southern California

California Republicans are condemning legislation they say is a part of a continued “assault on parents” who have flocked to local school board meetings over the last year to protest curriculum changes and policies.

Assemblyman James Gallagher (R-Yuba City) said in an Aug. 1 statement Republicans oppose the passage of Senate Bill 1100 (SB 1100) which would authorize a presiding member of a legislative body conducting a public meeting to remove an individual for disrupting the meeting.

“This bill is a direct attack on parents coming to their school board meetings and voicing their passionate displeasure with how our schools have been managed. Regardless of this bill, a parent revolution is coming this fall,” Gallagher said.

SB 1100 has passed both the state Senate and Assembly. Sen. Dave Cortese (D-San Jose), author of the bill, said it’s headed to California Gavin Newsom’s desk to either veto or sign into law.

Cortese argues the legislation is needed to crack down on disorderly conduct at public meetings. He says the Brown Act, a 1953 state law that requires an opportunity for public input during meetings, is not enough to deal with some people’s behavior and should be updated.

The legislation would clarify the parameters for when people should be removed and prevent public officials from needing to end meetings early “due to bullying, harassment, or violence,” said Cortese in a statement.

The bill would change the words “willfully interrupting” to “disrupting” defined as “engaging in behavior during a meeting of a legislative body that actually disrupts, disturbs, impedes, or renders infeasible the orderly conduct of the meeting.”

Additionally, it would require the presiding official to warn people if their behavior is disruptive before removing them or clearing a meeting room.

Public officials and people who attend meetings “continue to deal with disorderly conduct during meetings at such a high magnitude that critical business and the legislative process as a whole has become impaired,” according to Cortese.

However, Sen. Jim Nielsen (R-Tehama) told The Epoch Times on Aug. 4 the bill is an attempt to silence the voices of parents who feel the schools are “harming their children” with curriculum changes and other matters.

“This is about absolutely freezing parents out of the education of their children, and it should be roundly condemned and rapidly defeated,” he said.

“For the first time ever, parents got a good look into the school rooms because of COVID over the whole country. They did not like what they’ve seen, so they have risen up to take their children back from these schools,” Nielsen said. “I totally support the parents in this regard.”