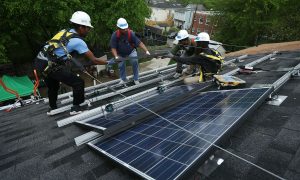 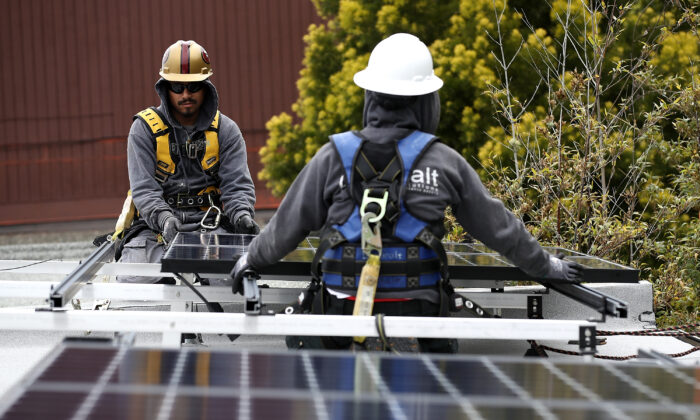 Workers install solar panels on the roof of a home in San Francisco, Calif., on May 9, 2018. (Justin Sullivan/Getty Images)
Southern California

In an unprecedented attempt to cut energy use in new homes by fifty percent, the California Energy Commission (CEC) in 2018 adopted new building standards that require solar photovoltaic systems beginning on January 1, 2020.

As that date approaches, the CEC has found itself reevaluating certain parts of the plan that have yet to be strictly defined.

At a business meeting on Nov. 13, the CEC tabled a proposal submitted by the Sacramento Municipal Utility District (SMUD). Opponents called the proposal “a direct attempt to water down California’s building standard.”

“The Building Standards allow for shared or community solar and battery systems to fulfill the requirement; however, SMUD’s plan would have allowed new homes to buy into existing and previously planned projects,” stated a press release by the Solar Energy Industries Association (SEIA).

Lindsay VanLaningham, spokesperson and public information specialist for SMUD, told The Epoch Times that CEC staff had previously found the district “met all the requirements and recommended it for approval. And this compliance option was provided for in the 2019 Building Standards.”

According to Amber Beck, the Public Information Officer for the CEC, the proposal was put on hold in order “to have some discussions about a few of the items that came up.” She added that Commissioner Andrew McAllister “wanted to ensure that this proposal wasn’t hampering consumer choice [or] flexibility for home builders.”

“We are extremely disappointed that the CEC deferred action on our Neighborhood SolarShares program,” SMUD said in a statement. “While we are disappointed, we are committed to this program and will continue to work with CEC to refine the definition of ‘community’ to ensure that the benefits of solar energy can be fully realized while continuing to support affordable housing in the Sacramento region.”

The definition of the term “community solar” appears to be one of the central issues that prompted the CEC’s delay in approving SMUD’s proposal.

“If you really want to get into the technical details, that is the rub of what this whole thing is about,” David Rosenfeld, director of Solar Rights Alliance, told The Epoch Times.

According to Rosenfeld, real community solar programs should be located within the community, they must be built in addition to any existing solar farms, and that all community solar panels must contribute directly to individual homes.

“Let’s say there’s 300 panels. Ten of those panels are directly responsible for delivering energy to your home,” he said. Also, “whoever’s signed up for community solar [should be] getting the same kind of benefits [and] energy credits from those solar panels as they would if they were on their rooftop.”

“SMUD’s proposal did none of those things,” Rosenfeld added. “That’s why the commission put the brakes on. They realized they had not adequately defined what community solar truly was and they realized that SMUD was basically trying to exploit that fact.”

Susannah Churchill, the California Director at Vote Solar, told The Epoch Times, “I think this is a great opportunity for the CEC to deliberate and really come up with some clear rules for what community solar that qualifies for the homes mandate should look like, how local does it need to be geographically to the customers that it serves, and how much of a savings does it need to provide to those customers.”

SMUD’s proposal also boasts of an annual net savings for residents of about $20, a figure that Churchill referred to as “just not good enough.”

“If utilities want to offer a community solar option, those savings should be equivalent to what you would get with a rooftop solar system,” Churchill said.

The CEC has estimated that a rooftop solar system would save the average single-family home around $35 per month on their utility bill.

Beck offered a more comprehensive assessment: “Our calculations stated that [solar panel installation] would raise the cost of a 30-year mortgage by about $40 a month, but homeowners would likely save about $80 a month on their utility bills.”

When questioned about the alleged incongruity in savings, spokesperson VanLaningham provided a number of reasons why the SMUD proposal would be effective.

“This program would avoid increasing the housing price,” she told The Epoch Times. “It provides a low cost option for builders that guarantees a net benefit to homeowners, who may otherwise not be able to take advantage of solar.”

“It’s less maintenance, no risk, and a guaranteed benefit, whereas with rooftop solar, the homeowner would be responsible for maintenance, repairs and the cost of the system,” she added.

Another criticism of the proposal is the fact that consumers have to commit to the SMUD proposal for 20 years.

“During that 20 year period, it will be very difficult for the homeowner to have their own solar and battery storage,” Rosenfeld said.

“That’s one of our big concerns here,” said Churchill. “The new homes solar mandate is supposed to be extending customer choice and extending the benefits of solar and … greater self-sufficiency from clean energy to more Californians, but with this option it actually restricts those customers’ choice.”

Meanwhile, VanLaningham said that the SMUD proposal was “meant to be used to complement rooftop solar, among other tools, so we can all reduce carbon emissions and realize the benefits of solar.”