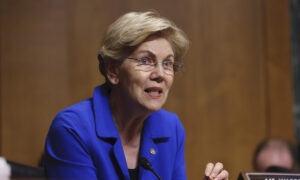 According to the U.S. Geological Survey, the California quake hit at about 4:53 p.m. local time and registered 5.4 magnitude on the Richter scale.

The epicenter of the earthquake was approximately 30 miles south of Palm Springs and about 60 miles north of San Diego.

"The whole drug store, including shelves started shaking and some merchandised started falling off the shelves," Zhu said.

She said that customers started to look panicked but it only lasted for probably about five seconds, which alleviated fears that the quake could be the next "big one," she added.

The last time an earthquake struck, Zhu said the quake shook the building more and lasted longer. Customers ran out of the building then, but none ran out this time.

Vira Yu was at the mall and said, "The chair was doing the rock 'n' roll dance."

The Las Vegas Sun reported that the government building was “swaying” and officials at University of Nevada, Las Vegas said they felt the quake as well. Las Vegas is 230 miles from the epicenter of the quake.