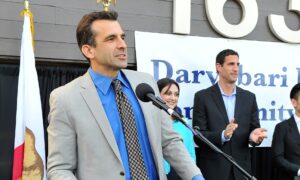 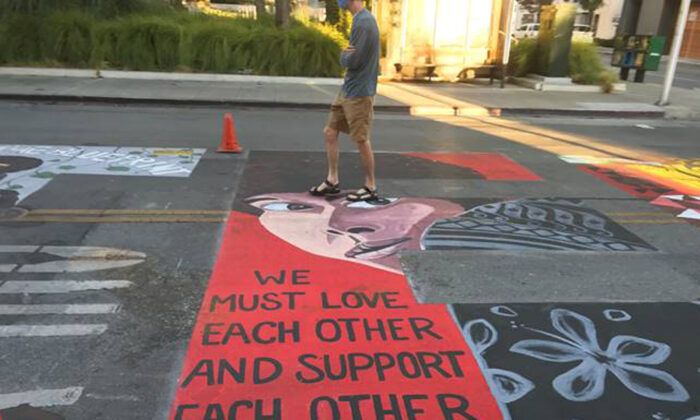 A man walks by a Black Lives Matter mural showing Joanne Chesimard, aka Assata Shakur, who was convicted of killing a New Jersey law enforcement officer in 1973, in Palo Alto, Calif., on July 8, 2020. (Dave Price/Palo Alto Daily Post via AP)
US News

A group of police officers is suing the city of Palo Alto, California, for allowing a Black Lives Matter mural to remain in place for months after it was painted on a city street in June 2020.

City officials permitted and encouraged artists to create 16 different anti-police murals on city property that were placed together and spelled out “Black Lives Matter,” the officers said in the 12-page civil suit, filed in Santa Clara County Superior Court.

The mural reportedly featured an image of Joanne Chesimard, aka Assata Shakur, who was convicted in 1977 for the murder of a state trooper in New Jersey but escaped from prison and fled the United States. Chesimard is a wanted fugitive who is regarded highly by some racial activists.

The mural also contained a logo attributed to the New Black Panthers, which is described by the Southern Poverty Law Center as a “virulently racist and anti-Semitic organization whose leaders have encouraged violence against the whites, Jews, and law enforcement officers.”

The officers were forced to pass by the mural every time they reported to work, which amounted to a “discriminatory and harassing work environment,” the suit stated. “Not only did the defendants allow the harassing and discriminatory iconography to exist in the workplace, but they also sanctioned, approved, encouraged, and paid for it.”

Officers raised concerns about the messaging in the mural to city and police officials but were told the mural would remain in place. That was a violation of the Fair Employment and Housing Act, according to the suit.

The mural was painted by different artists. In the letter “E,” Cece Carpio, who works at the San Francisco Arts Commission, painted the likeness of Chesimard. She said on Facebook last year in response to criticism for portraying Chesimard that the fugitive “has always maintained her innocence and she was never going to get a fair trial.”

“If we’re painting huge letters of Black Lives Matter on the streets, it’s important to know the history of the unjust treatment of Black Lives and Black Movements,” she wrote.

But the National Police Association, a nonprofit that supports law enforcement, called the painting “reprehensible.”

“For law enforcement required to enter the building, is there any description other than a hostile work environment?” it said last year, calling on people to sign a petition asking for the mural’s removal.

The Palo Alto Police Department and city officials didn’t respond to requests by The Epoch Times for comment about the lawsuit.

In a statement to news outlets last year, a city spokeswoman said the mural “is one aspect of a larger City dialogue taking place on race and equity and connects to the City’s thoughtful conversations on the role of policing.”

“The mural is temporary, and the City has no plans to expedite the removal of the mural sooner than currently planned. In no way does the mural take away from the value we have in our police officers who serve our community every day. Temporary art is a means of expression on difficult issues and the Black Lives Matter mural is thought-provoking and is inspiring conversation,” she said.

The mural was removed in November 2020.