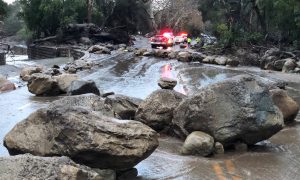 Mudslides and Flooding Kill at Least 13 in California
0 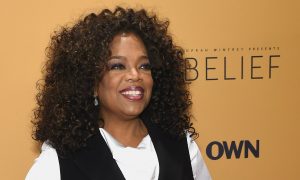 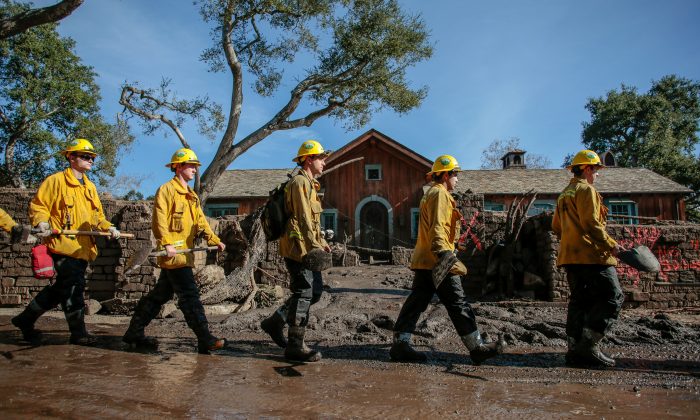 California Police Hope for ‘Miracle’ to Find Missing in Mudslide

MONTECITO, Calif—Californian authorities called for public help in locating seven people still missing after mudslides that killed at least 18, as crews carried on searching for survivors on Saturday.

The Santa Barbara County Sheriff’s Office made a plea for information on any of the missing residents, while acknowledging that finding anyone alive would be a “miracle”.

“The missing persons were reported by family and friends, and resided in areas that were heavily damaged during the storm and subsequent mudslides,” the sheriff’s office said.

The sheriff’s office listed the names of the missing, who range in age from two to 62, in a statement on Friday night.

The disaster struck on Tuesday after heavy rains soaked the area near Montecito, north of Los Angeles, where vegetation had been denduded by the largest wildfire in California’s history.

Sodden hillsides gave way, unleashing a torrent of mud, water, uprooted trees and boulders onto the valley below and causing what the police described as “traumatic injuries” to the victims, who ranged in age from 3 to 89.

The destruction covered 30 square miles and more than 2,100 personnel from local, state and federal agencies, including the U.S. Coast Guard, the U.S. Navy and the American Red Cross are involved in “challenging” search, recovery and relief efforts, the California Department of Forestry and Fire Protection said.

Officials ordered residents in most of the southeastern corner of Montecito, which is east of Santa Barbara, to leave their homes for what was likely to be one or two weeks.

One of California’s most celebrated roads, coastal Highway 101, was partially closed, with mud was two feet deep in places, while in Montecito, mud reached the roof lines of houses, as residents surveyed their damaged homes.

“We have a yard to redo and hopefully our insurance will help out with that, but the people across from me, newer homes, gone,” Garrett Speirs, a 54-year-old artist who has been living in Montecito for 20 years, said.

“Everybody down below gone, two girls gone …Two sixth-graders in the school our kids went to,” Speirs added.