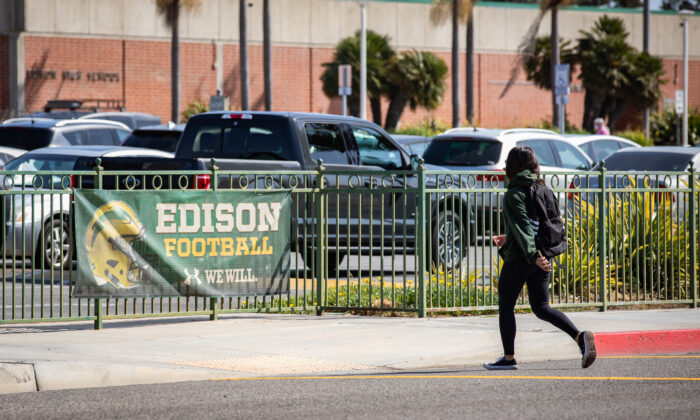 A student walks past a sign for the school's football team at Edison Highschool in Huntington Beach, Calif., on March 10, 2022. (John Fredricks/The Epoch Times)
Southern California

Middle school and high school students in California will be able to snooze a little longer before heading to class this year, due to a law delaying school start times that takes effect this year.

Citing research on the impacts of adolescent sleep deprivation and the benefits of a later school start time, the state Legislature passed a law in 2019 requiring public high schools to begin classes no earlier than 8:30 a.m., while middle schools can begin instruction no earlier than 8 a.m.

The average start time for high schools across the state prior to the pandemic was 8:04 a.m., according to a 2017-18 survey by the U.S. Department of Education.

Gov. Gavin Newsom signed the law in October 2019, allowing schools to wait until July 1, 2022 to implement the changes.

For years, health experts have warned of the negative health effects of insufficient sleep among teens.

A 2014 study by the American Academy of Pediatrics called for a later school start time for adolescents, saying the average teenager requires 8.5 and 9.5 hours of sleep to reduce the risk of obesity and depression and improve academic performance.

“The American Academy of Pediatrics strongly supports the efforts of school districts to optimize sleep in students and urges high schools and middle schools to aim for start times that allow students the opportunity to achieve optimal levels of sleep and to improve physical and mental health, safety, academic performance, and quality of life,” according to the study.

A similar school time-change bill was vetoed by Gov. Jerry Brown in 2018 after the bill faced opposition from the California School Boards Association and the California Teachers Association, one of the largest teachers unions in the state.

When the bill was reintroduced and passed in 2019, the school board group expressed disappointment, saying the bill doesn’t consider teachers or families who depend on schools for childcare.

Since then, the association has pivoted to finding ways to support schools and families ahead of the bill’s implementation.

Troy Flint, a spokesperson for the California School Boards Association, told The Epoch Times some schools that have begun implementing the law early have already experienced some challenges.

“As schools have grappled with the implications of the law, they have encountered some of the problems we feared, such as revised schedules conflicting with after-school jobs, extracurricular [activities], and sibling childcare responsibilities, and issues with morning drop-offs for parents with inflexible work schedules,” Flint said.

However, Flint said, schools have worked to find solutions to these challenges—including adding transportation services and other programs—and have been aided in this process by COVID-19 relief funding and increases to the state’s local control funding formula.

In addition, the association has supported state Assembly Bill 2933, which would more than double funding for school buses and is currently awaiting a hearing in the state Senate.

The Los Angeles Unified School District has been preparing for the transition to a new start time for two years, a district spokesperson told The Epoch Times, with some schools implementing a later start time last year.

“While school start times differ for elementary, middle and high schools, all schools meet or exceed expectations for minimum instructional hours, which remain the same, and will be in compliance with state law,” the spokesperson said.