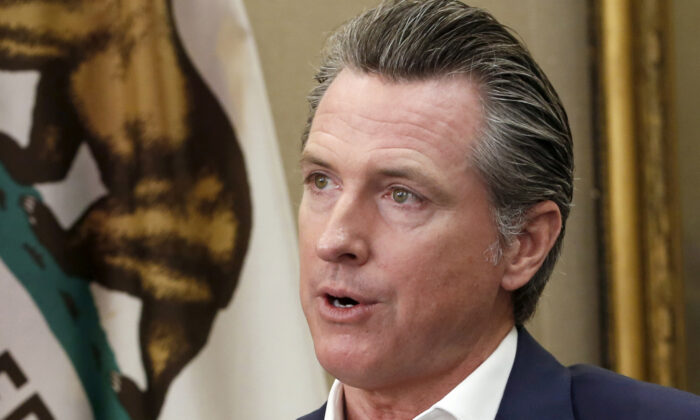 California Gov. Gavin Newsom during an interview in his office at the Capitol in Sacramento, Calif., on Oct. 8, 2019. (Rich Pedroncelli/AP Photo)
US News

California students may no longer have to participate in physical fitness tests under a new proposal by Gov. Gavin Newsom over fears they may promote bullying and discrimination against disabled and non-binary students.

Any pupil with a physical disability who is unable to take all of the physical performance test is given as much of the test as his or her condition will permit.

The main goal of the test (pdf) is to “help students in starting life-long habits of regular physical activity,” and results are provided to students and their families to monitor students’ overall fitness, as well as the school, in order to monitor their physical education programs.

However, schools may drop the physical test until at least 2023 as the California Department of Education “consults with experts” regarding the “purpose and administration of the physical performance test.”

According to the 2020-2021 education budget bill which was released last week, the department would speak to experts and other stakeholders “including but not limited to, individuals with expertise in fitness, adaptive physical education, gender identity, and students with disabilities, in order to provide recommendations regarding the purpose and administration of the physical performance test.”

H.D. Palmer, spokesman for the Department of Finance, told the Epoch Times that schools “would temporarily hitting the ‘pause’ button on the administration of the currently required test during these three years.”

“At issue is whether the test in its current form is discriminatory, principally in terms of non-binary students as well as students with disabilities,” he said in an emailed statement. “The state Department of Education advises they’ve received complaints from districts over the years that the test is discriminatory, including whether the Body Mass Index (BMI) screening in the test discriminates against non-binary adolescents (students must select “male” or “female” for BMI screening).”

Palmer said that BMI screening “plays a role in the issues of both body shaming and bullying” and cited the U.S. Center for Disease Control’s 2017 Youth Risk Behavior Survey, which reported that students who identified as LGBTQ were more likely to be bullied and more likely to consider suicide than their peers.

“California is working to keep all students safe and healthy, consistent with the Governor’s commitment to a California that respects all students.

“Given the body of research on the impacts of bullying on transgender and special education students, this temporary pause will allow for a look to determine whether the current test can be modified or whether a new assessment should be developed,” the director said.

However, Palmer noted that this would not have any effect on PE classes, which will continue as they are currently administered and continue to be a “graduation requirement.”

California has been using The Cooper Institute’s FitnessGram assessment, recognized by the Obama administration since 1996, which includes running assessments, push-ups, curl-ups, and “sit and reach” stretches.

However, a study published last year by scientists from Louisiana State University and Adelphi University suggested that while physical tests didn’t put students off physical education, they also did not encourage a positive outlook on participation.

“Our results show that extreme views on this controversial subject may be unfounded, since fitness tests neither put students off PE nor encourage a positive outlook on participation,” said Kelly Simonton from Louisiana State University.

“What’s more, school fitness tests are rarely used to educate students about fitness and they’re often implemented poorly, so we cannot help but think that class time would be better spent in equipping students with knowledge and skills that more closely support the PE curriculum,” he added.

The researchers suggested, however, that fitness testing could have more impact if it was implemented as part of a fitness education curriculum.

Meanwhile, the percentage of students identified as “needing improvement” and having a “health risk” went up by 3.3 percentage points among fifth graders, 4.4 for seventh graders, and 3.8 among ninth graders.