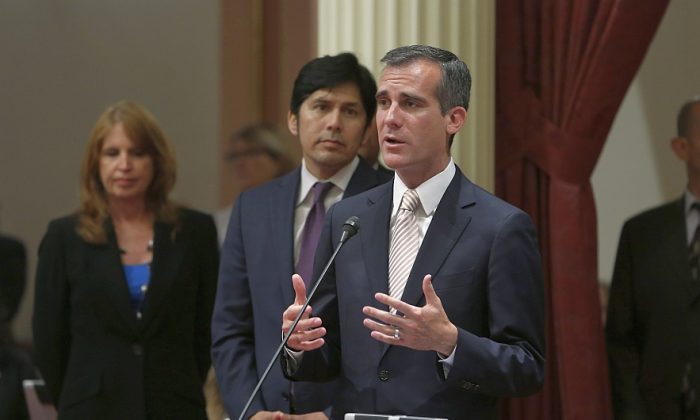 LOS ANGELES—Los Angeles Mayor Eric Garcetti on Thursday spoke in favor of a state bill that would extend California’s restrictions on gun ownership for people with mental health problems.

“I’m very much in favor of statewide leadership that would help us make sure that guns aren’t in the hands of those folks that have mental issues,” Garcetti told Video News West.

This was in direct response to a shooting rampage several weeks ago in Isla Vista, Calif., close to UC Santa Barbara. The mother of 22-year-old suspect Elliot Rodger and a mental health agency had called authorities prior to the shooting after he posted disturbing videos to YouTube with threats of violence.

A family friend said Rodger had seen therapists since childhood. But despite being treated for mental health problems, Rodger was legally able to purchase guns under California law.

“During the course of his interaction with mental health professionals, he apparently had never been either institutionalized or committed for an involuntarily hold of any kind,” said Santa Barbara County Sheriff Bill Brown.

“And those are the two triggers that actually would have made him a prohibited person in terms of a firearms purchase. So he was able, sadly, to obtain those three firearms.”

Also on Thursday, a gunman shot three people at Seattle Pacific University before being pepper-sprayed and tackled by a student as he was reloading his shotgun. Police arrested shooting suspect Aaron Ybarra, 26. According to police and his attorney, Ybarra had been treated for mental illness in the past and twice involuntarily committed to a mental health facility. He had worked at a gun range in the state of Washington and had purchased a shotgun legally.

Harry K. Kasbarlan is the owner of custom gun manufacturer Global Arms and has a small shop in Glendale, Calif., near Los Angeles. He is a rifle instructor for the NRA.

Kasbarlan said even though California’s gun laws are stricter than many other states’, the laws make sense. He said he supports the new bill proposal.

“As long as they’re mentally stable,” he added.

House Democratic leaders recently said they are considering an amendment to a spending bill that would strengthen background checks for gun buyers, but they said it had little chance of passing.

The Obama administration is also planning to fund gun violence prevention studies, something the White House has not done in about 20 years.