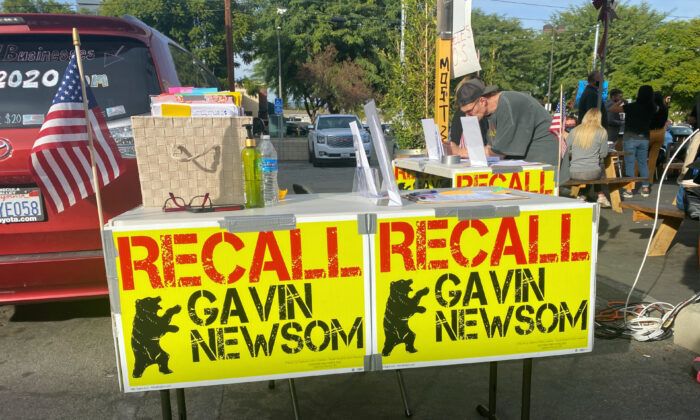 A man looks at items on a table calling for the recall of Gov. Gavin Newsom outside the Pineapple Hill Saloon & Grill in Sherman Oaks, Calif., on Jan. 7, 2021. (Jamie Joseph/The Epoch Times)
Southern California

Proposed legislation in California that would allow targets of future recall movements to identify and contact petition signers to potentially change their minds sparked lengthy debate in a recent state Senate committee meeting.

Senate Bill 663 (SB 663) would provide data access to recall targets, allowing them to contact petition signers and correct any potential misleading information they might have received from signature gatherers.

Sen. Josh Newman (D-Fullerton), who authored the legislation, said voters are often tricked into signing recall petitions and should be more easily able to withdraw their signatures if they feel they’ve been deceived.

“It is a fundamental tenet of the American justice system that the accused should always have the right to face his or her accusers. This is what we’re endeavoring to do—nothing more, nothing less than that,” Newman said.

But Orrin Heatlie, founder of the campaign to recall Gov. Gavin Newsom, told the Senate Committee on Elections and Constitutional Amendments on April 12 that the bill is “dangerous and reckless,” and said it should be scrapped.

“I talked to people every day who were afraid to participate in the petition-gathering process because they were afraid their personal private information would be disclosed to the target himself,” Heatlie said.

“And they actually would walk away from the tables and turn away from participating in the lawful, peaceful petition-gathering process—their First Amendment right—because they were afraid of retaliation and retribution.”

The bill “would give the target of a recall access to all of that data, all of that personal information, and it would stifle the constitutional process that people are guaranteed,” Heatlie said. “It would disenfranchise the voters of the state, and it would basically just nullify the petition gathering process for recalls as a whole.”

Heatlie pointed out that as founder of the Recall Gavin 2020 effort, he doesn’t have access to the personal information of signers—and neither should those who oppose it.

No Impact on the Current Recall

Newman—who was recalled in 2018 and then reelected last year—said SB 663 has nothing to do with this year’s Newsom recall movement.

“If signed into law, it will not go into effect until next year. As such, it will have no impact whatsoever on the current recall effort against Gov. Newsom,” Newman said.

But he added that the target of future recall efforts “should have recourse to at least ascertain whether or not voters understood what they were signing, particularly given the implications to that elected official’s career and their relationship to the voters.”

He said signers rarely take the time to read the actual text of a petition, and instead often rely upon the representations of the signature gathers.

“This means that the signature gatherers often operate without any sort of transparency, routinely and systematically misleading voters about not only the rationale but the process, and with little if any concern about legal repercussions,” Newman said.

Alina Evans, a spokesperson for Newman, told The Epoch Times that SB 663 stems from the senator’s own experiences when he was recalled in 2018, and “having people in his district tell him that what they signed was not in fact what they had intended to sign.”

“Many people told him they were tricked into signing the recall petition. … So, this is a way to correct that,” Evans said.

Sen. Connie Leyva (D-Chino) told the committee she had participated in signature gathering for 30 years prior to running for office. She supported the bill, despite “concerns over privacy.”

Election Integrity Project, California (EIPCa), a watchdog group, submitted a letter of opposition to the committee. According to the letter, the bill jeopardizes the citizens’ right of privacy by disclosing their name, address, and contact information to the target of the recall petition, allowing entities to target them with mass mailings, telephone calls, or electronic media communications.

“This constitutes an egregious breach of voter privacy and exposes the voters to the potential of a barrage of phone calls, snail mail and possibly even personal visits in an attempt to convince them to withdraw their signature,” the letter states. “Not only is this demeaning and insulting to voters’ intelligence, it is likely to produce understandable reluctance for them to sign any petition in the future.”

EIPCa contends that Newman offered no evidence to support allegations that signature gatherers “frequently communicate inaccurate information to voters in order to obtain their signatures on petitions,” as stated in the bill.

“That in itself is offensive in the extreme to citizens taking advantage of their constitutional right to hold elected officials accountable to their oath of office, whether as petition circulators or signers,” the letter states.

Ruth Weiss, EIPCa’s legislative director, told The Epoch Times that it’s wrong to base legislation on the supposition that most signature gatherers are deliberately misleading the public.

“It’s very unfair to all of these patriotic people who go out and work their tails off to gather signatures because they want to hold public officials accountable for not doing the job they were elected to do,” Weiss said.

She said the bill has the potential to suppress the willingness of the people to hold elected officials accountable “if they know that they are going to be either by mail, email, or phone calls, somehow annoyed or harassed by the people they’ve already decided that they want to recall.”

The Republican Party of Orange County (OC GOP) also released a scathing newsletter opposing SB 663, calling the bill “an attack on the constitutional rights of all Californians” and “a form of cancel culture on steroids.”

“Let us make this insanity perfectly clear: In California, you do not need an ID to cast a secret ballot in a Presidential election, but if you try to exercise your constitutional right to sign a recall petition, your private information will be handed over,” the newsletter stated.

The Future of the Bill

Newman has proposed several amendments to soften the bill, according to his spokesperson Evans.

One amendment would prohibit recall targets from reviewing signers’ information if the target holds an office representing fewer than 50,000 registered voters, where the likelihood of retaliation could be greater; others would prohibit a government official from discriminating against a person for signing a petition, or make it a misdemeanor offense to misuse signer information.

Still, hiring signature gatherers who are paid on a per-signature basis “creates an incentive that can be problematic and result in misleading voters,” Evans said. Because they are hired to get as many signatures as they can, “it’s in their interest to kind of use whatever tricks they can to get people to sign as quickly as possible.”

The bill isn’t intended to be condescending to petitioners, but is meant to be informative, Evans said. “It wouldn’t necessarily be in the interest even of the target of the recall … if they were insulting the people who signed the petition. If it was not really what you wanted to sign, you can remove your name … and this bill provides a path to do that.”

Newman has also proposed another bill, Senate Bill 660 (SB 660), to ban the practice of hiring signature gatherers on a per-signature basis. However, they could still be hired for an hourly rate.

On April 12, dozens of opponents called in to oppose SB 663, including the representatives for the California Chamber of Commerce. Despite the opposition, the committee voted 4–1 to move the bill forward, with Sen. Jim Nielsen (R-Tehama), the committee’s lone Republican, casting the dissenting vote.

SB 660 also passed in the committee by a 3–2 vote, with Sen. Steve Glazer (D-Orinda) joining Nielsen in opposition.