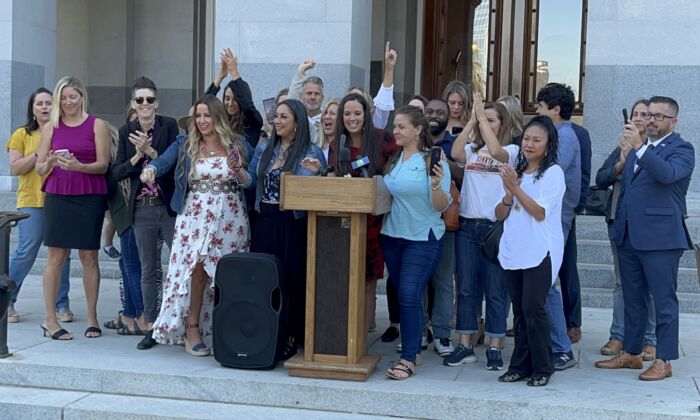 Parental rights advocates are celebrating the withdrawal of a California bill that would have allowed children 15 years old or up to get vaccines without parental consent in Sacramento on Aug. 31, 2022. (Courtesy of Protection of the Educational Rights of Kids)
Northern California

Parental rights advocates celebrated on Aug. 31 the withdrawal of legislation proposed this year in California that would have allowed children 15 years old or older to get vaccines without parental consent.

State Sen. Scott Wiener pulled Senate Bill 866 from the floor of the Assembly where a vote was expected later in the day. The move essentially kills the bill this year.

The bill would have lowered the age of consent to 15 years old for receiving a federally approved vaccine without parental permission.

Wiener posted a statement on social media following his decision, saying the bill did not have enough support to pass.

“We have made the difficult decision not to call up SB 866 for a vote on the Assembly floor. While the votes are very close, we are several votes short of 41, and we don’t see a viable path for those final few votes,” he wrote on Twitter.

A group of parents, attorneys, lawmakers, and organizations opposed to the legislation gathered on the steps of the Capitol in Sacramento to cheer the news.

“Let the Republicans and Democrats see the kind of power parents have in this state,” said Denise Aguilar, co-founder of Freedom Angels—a human and civil rights advocacy group—on a live broadcast from the Capitol steps. “We are going to take back this state.”

Amy Bohn, of the Protection of Educational Rights for Kids, told The Epoch Times the outcome marked “a historic day in California for parental rights.”

“We did something that hasn’t been done in California, so it’s a huge victory today,” she said. “It’s such a big deal because California impacts the entire country. It always has. So, it’s a ripple effect to show the entire country that you cannot come in between a parent and their child.”

Sen. Brian Dahle (R-Redding), who is running for governor this year, commended the organizations for their efforts, but he expects the bill to return next year.

“It’s a great day for parents,” he said. “This is just a reset, trust me. They’ll be back next year. We really need to gain respect as parents by removing these people from office. That’s what really will change California and gain your respect. It’s time for parents to get involved, get out and vote.”

Several state parental-rights groups, parents, and attorneys organized this year to oppose the legislation. They planned to protest at the Legislature this week until the final decision.

“What happened today was not the product of a minority, fringe, extremist group,” they said in a statement to The Epoch Times. “It was the result of thousands of tireless hours of millions of Californians uniting, educating and empowering each other, and rising up together to take our seats at the political table where we belong and have the right to be.”

Having won lawsuits against vaccine mandates and representing clients with vaccine-related injuries, Pearson said the legislation was “patently illegal.”

“It’s void because it conflicts with federal law,” she told NTD News. “But there’s another layer to this. What SB 866 represents in California is another brick between the wall that should be surrounding and protecting parents, guardians and their children.”

Since the bill’s introduction this January, Wiener, a San Francisco Democrat, said he had faced harassment and misinformation, including death threats against him and teen advocates by a group that he described as an “organized minority of anti-vaxxers.”

“SB 866 did nothing more than empower young people to protect their own health, even if their parents have been brainwashed by anti-vax propaganda or are abusive and neglectful,” he said.