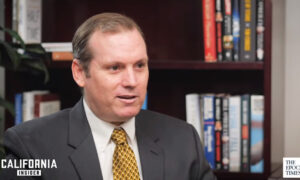 California Is Like an Ocean With Strong Conservative Undercurrents: Analyst

This election cycle showed an inevitable resurgence of conservative thinking in California, as well as an increasing “viciousness” in politics, says polling and political analyst Craig Keshishian.

He talked with The Epoch Times’ “California Insider” about how, historically, Republicans and Democrats have shared California in a dynamic way that made the state thrive.

For example, the Republicans brought their financial conservatism to state policymaking, while the Democrats were strong on environmental policy.

“Now we have one-party rule. I don’t think that’s playing out very nicely,” he said.

Though the Democrats still have a big advantage in the state, he sees people “reacting to being harshly governed,” and a rebellious streak arising against some key Democratic mandates.

Keshishian is a senior analyst for the Insider Advantage news agency, and his career as a polling expert included serving Ronald Reagan’s administration.

He described California’s current political landscape as being similar to an ocean, with a liberal surface and strong conservative undercurrents.

Los Angeles and San Francisco have been “deep blue pools of voting and thinking” for years, he said. But those pools have become deeper blue, and Silicon Valley and San Diego County have also trended more blue recently.

Yet Orange County, parts of Northern California, and the Central Valley “remain relatively moderate if not conservative,” he said.

“Why are Californians so enamored with very far left-wing politics in their congressional races around Los Angeles? It never used to be that way,” Keshishian said.

He recalled his work on George Bush’s campaign in 1988, when the Republican won all of California.

Pasadena, Burbank, Glendale, and other areas surrounding LA were represented by Republicans in the 1990s, he said.

In the ’60s, the free speech movement started at the University of California–Berkeley with activist Mario Savio. Now, Keshishian said, California’s university campuses are anything but places for free speech.

The Republicans have missed some steps with them, he said, but the Democrats are doing so now, too.

“[California] is like an ocean with currents underneath,” he said. “You have a top layer of the water that’s kind of calm and pacific, and then underneath you have riptides and crosscurrents.

That’s why they voted down Proposition 15, for example. Prop. 15 was heavily supported by Democrats and would have raised commercial property taxes with the stated aim of funding schools.

Keshishian called the proposition “a nail in the coffin for property tax rights.” He said Californians don’t want to lose their property tax protections.

He said they also don’t want to judge people on the color of their skin, which is why they voted down the affirmative action measure, Proposition 16, which also had heavy Democratic support.

And Californians want the freedom to choose their employment and be entrepreneurs, which is why they voted in favor of Proposition 22, which stepped back some parts of AB 5, a law that limited the gig economy by forcing contract workers to become employees with benefits.

Aside from the proposition votes, the fact that four House seats flipped red in California this election cycle also shows a rise in the Republican tide, even if Democrats remain strongest statewide, Keshishian said.

With overly stringent Democrat-led COVID-19 mandates that have hurt restaurants and other businesses in the state, he said, “a rebellious streak has … risen and is now exposed.”

These are people who aren’t usually rebellious, he said.

He said the Democratic leadership has pushed them to this point. He gave the example of the controversial ban on outdoor dining in many regions, saying dining outdoors while social distancing is like walking outdoors. He doesn’t see how one is more dangerous than the other.

Keshishian said politics has become about personal attacks to the degree that it’s “poisoned the well” for a lot of people. Good people are scared of running for office because they face attack.

He has personal experience with such attacks.

“I was made out to be a Russian spy,” he said. The rumor was spread through social media due to his association with a certain politician. It hurt his business.

“That’s viciousness. It had nothing to do with making America great,” he said.

He recalled when he was working at the White House for the Reagan administration and his roommate was a Democrat who went on to form close ties with Bill and Hillary Clinton. They still respected each other.

It was about looking at politics “as a sport—not a blood sport—a sport,” Keshishian said.

He’s continued to work with Democrats, and it’s about a joint desire to see America prosper and thrive, he said. It’s not about doxing people (releasing their personal information to the public) or trying to destroy their business lives.

While the civility of politics has degraded, he said the degradation of voting integrity worries him just as much.

As a polling specialist, Keshishian has always kept an eye on vote counts. On Nov. 3, he watched the stream of votes being tabulated on the Secretary of State’s website.

“I never saw anything like this before in 30 years of [observing] … elections around the world. I’ve never seen a tally like that stop in the dead of the night, and then batches of votes coming in for just one candidate only—big batches, like 27,000, 12,000—with not one offsetting vote for the other candidate.”

He compared it to the election of Robert Mugabe in Zimbabwe in the 1980s. Keshishian was an investment banker at the time and was doing some due-diligence investigation before concluding dealings in the country.

He found it unbelievable that Mugabe got 100 percent of the vote. “How does that happen? That doesn’t happen. That’s engineered.”

“How come we can’t just have paper ballots that are voted by one person, i.e., going back to the old one-person, one-vote rule that sustained our democracy since we were founded?”

He cited a study by the nonpartisan 2005 Commission on Federal Election Reform, co-chaired by former U.S. President Jimmy Carter and former Secretary of State James A. Baker III.

That report stated, “Absentee ballots remain the largest source of potential voter fraud. … Absentee balloting is vulnerable to abuse in several ways: Blank ballots mailed to the wrong address or to large residential buildings might get intercepted. Citizens who vote at home, at nursing homes, at the workplace, or in church are more susceptible to pressure, overt and subtle, or to intimidation. Vote-buying schemes are far more difficult to detect when citizens vote by mail.”

The Carter Center issued a statement in May clarifying that the report recommended further study of vote-by-mail and precautions around it. Carter said he supported the expansion of vote-by-mail amid the pandemic.

“The voting franchise is very sacred. People have bled and died for it in battle,” Keshishian said. “Here we are squandering that, compromising that.”