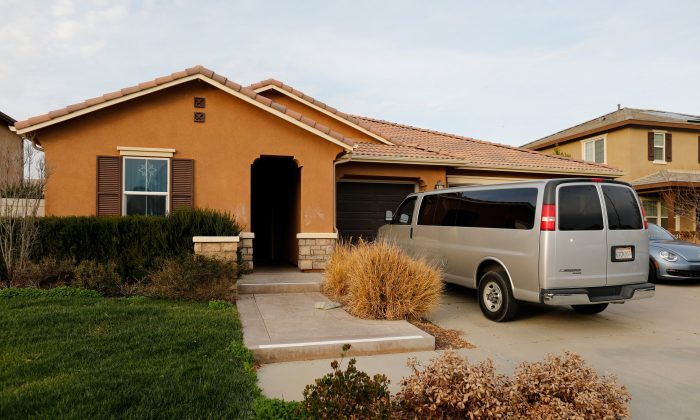 A van sits parked on the driveway of the home of David Allen Turpin and Louise Ann Turpin in Perris, California, U.S. on Jan. 15, 2018. (Reuters/Mike Blake)
US News

Thirteen children that were recently discovered having been abused for years by their parents after one of them escaped captivity in their California house, were only allowed to eat one meal a day, a law enforcement official said on Jan. 18.

The siblings, ranging in age from 2 to 29, were discovered in squalid conditions in Perris, 70 miles east of Los Angeles, after a 17-year-old girl escaped from the house and called 911.

Some of the siblings were found shackled.

In addition to only being fed once a day, the siblings were only allowed to shower twice a year, the unnamed official told NBC.

The siblings have been admitted to multiple hospitals for treatment due to severe malnutrition from being fed so little over the years, the official said.

They are receiving antibiotics, vitamins, and nutrients, with doctors concerned the kids would go into shock because they were so malnourished.

Psychologists are scheduled to visit them soon to evaluate them, once their physical conditions improve.

The parents of the siblings, David and Louise Turpin, were set to make their first court appearance on Thursday, reported Reuters.

They’re being held on $9 million bail each and have been charged with nine counts of torture and 10 counts of child endangerment.

David Turpin’s mother, Betty Turpin, told Reuters that the family had engaged an attorney, who advised her and others not to speak about the case.

But that hasn’t stopped sisters of Louise Turpin from speaking publicly.

Elizabeth Jane Flores, one of the sisters, said this week that when she lived with the family, David Turpin would enter the shower and watch her when she was bathing.

“He did things that made me feel uncomfortable,” she said on Wednesday. “If I were to get in the shower, he would come in there while I was in there and watch me, and it was like a joke. He never touched me or anything.”

A neighbor also told The Sun that he often saw the children being marched in the home “military style” late at night.