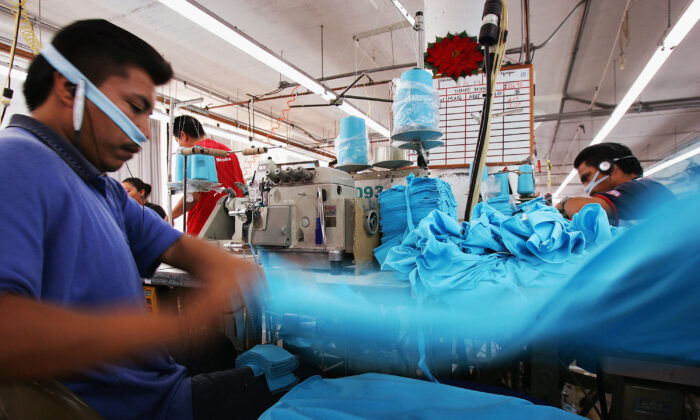 An employee tosses a garment onto a stack after sewing his portion of it at the a garment factory in Los Angeles, California, on Dec. 14, 2004. (David McNew/Getty Images)
Policies & Impacts

California has become the first U.S. state to eliminate paying garment workers by the piece or unit, and will instead pay them by the hour.

Gov. Gavin Newsom on Monday signed Senate Bill 62, also known as the Garment Worker Protection Act, which creates new “nation-leading” policies that will end the practice that has prevented thousands of workers in the garment industry from earning the minimum wage.

The new legislation also expands fashion brands’ liability for unpaid wages, including wage theft by contractors, and makes California the first state to create liability for companies that subcontract with the garment makers.

Due to vicious price competition, California’s garment industry is rife in violating the minimum wage law, overtime law, and health and safety standards.

Los Angeles has the highest concentration of garment industry workers in the United States, with an estimated 2,000 manufacturers employing more than 40,000 people, predominantly immigrant women, who can spend up to 12 hours a day producing “fast fashion.”

Under the piece work compensation system, workers can earn as little as 3 cents per assembly operation, for example trimming an item of clothing, which is well below the minimum wage per hour.

In a statement regarding the new bill, Newsom said the state of California is “holding corporations accountable and recognizing the dignity and humanity of our workers, who have helped build the fifth-largest economy in the world.”

“These measures protect marginalized low-wage workers, many of whom are women of color and immigrants, ensuring they are paid what they are due and improving workplace conditions. We are committed to having their backs as we work to build a stronger, more inclusive economy,” he added.

The bill—introduced by Sen. María Elena Durazo, a Democrat—does include an exception for worksites covered by collective bargaining agreements.

“Today we won justice for garment workers,” Durazo said. “For too long, bad-actor manufacturers have exploited garment workers toiling in unsanitary conditions for as little as $5 an hour. I applaud Governor Newsom for signing this important legislation to safeguard legal wages and dignified working conditions for this highly-skilled workforce and level the playing field for ethical manufacturers that are doing the right thing.”

But some experts and manufacturers fear the new law may lead to a lack of job opportunities in California, as the manufacturers may opt to outsource the garment work overseas for cheaper labor.

“These additional requirements will encourage companies to contract with manufacturers outside of California, thereby limiting the demand and workforce of garment manufacturers in California,” the California Chamber of Commerce wrote earlier this month.

“Nothing in SB 62 will address the problem of underground, bad actors in the garment industry evading the law. Instead, SB 62 simply eliminates piece rate work and allows those bad actors to continue to operate with business as usual while passing the buck to companies that have no control over these workers.”

The California Chamber of Commerce said legislation should instead look at educating garment workers about their rights and tighten existing enforcement mechanisms if the state wants to rid the industry of “bad actors” operating outside of industry law.

Senate Bill 62 was among 18 job-related bills signed by Newsom on Monday, including SB 639, which prohibits employers from paying workers with disabilities less than the California minimum wage, and AB 73, which will help protect farmworkers from wildfire smoke by deeming them essential workers, meaning they can access the state’s stockpile of personal protective equipment.