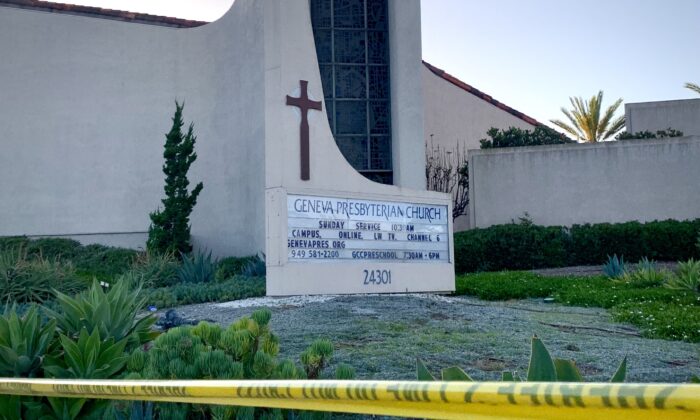 Police tape at Geneva Presbyterian Church after a shooting left one dead and five injured in Laguna Woods, Calif., on May 15, 2022. (John Fredricks/The Epoch Times)
Crime and Incidents

The man accused of shooting six people at a church in California on May 15 was identified as a Nevada resident who authorities say was taken down by a doctor.

David Wenwei Chou of Las Vegas was booked into the Orange County Jail on one felony murder count and five felony counts of attempted murder. Chou is a U.S. citizen who was born in China, and has experience as a security guard.

The suspect is being held on $1 million bond.

Authorities said Chou went into the Geneva Presbyterian Church in Laguna Woods around 1 p.m. on Sunday, revealing a gun and opening fire during a lunch banquet.

Dr. John Cheng charged Chou and disarmed him, authorities said in a briefing on Monday.

“Without the actions of Dr. Cheng, there is no doubt there would be additional victims,” Orange County Sheriff Don Barnes told reporters.

The intervention allowed others to take action, with another parishioner hurling a chair at Chou.

Cheng died from wounds he suffered and was pronounced dead at the scene. He leaves behind a wife and two young children.

Cheng’s online profile says he grew up in Texas and was a board-certified physician and surgeon. “It is rare to find a family doctor so well able to give quality care in such a wide variety of situations and arenas. His commitment to care conventionally and holistically for his patient’s physical, emotional, and spiritual needs continues to delight his new patients and long-term patients alike,” it states. He was employed by the South Coast Medical Group.

“We are all hurting today for the community, for the victims, and specifically, for Dr. Cheng’s family,” said Kristi Johnson, the assistant director in charge of the Los Angeles Field Office.

Five people were injured. They were identified as five Asians aged 66 to 92. Four were male. Two are in good condition. Two are in stable condition. The fifth patient’s status is unclear.

Preliminary information indicates that Chou “was upset about political tensions between China and Taiwan,” according to Barnes.

A federal hate crimes investigation was opened, with the FBI and U.S. prosecutors looking at what federal charges can be brought against Chou.

Evidence suggests Chou “was motivated by some type of hate,” Johnson said.

Two guns were recovered at the scene, as was a cell phone. One gun was purchased in 2015 while the other was bought in 2017, officials said.

A car Chou is believed to have driven to the church is being examined, with evidence already collected linking the man to the crime.