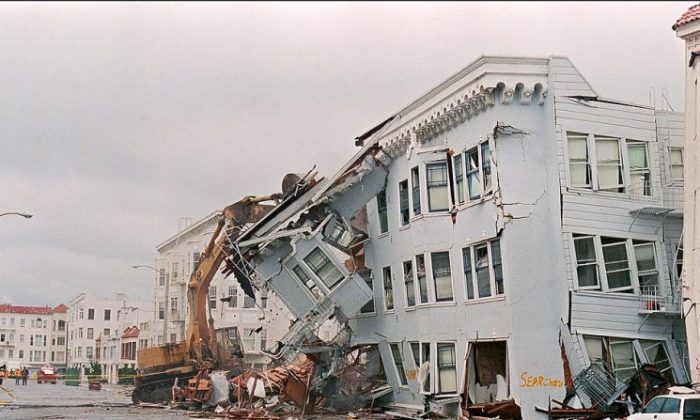 The front of an apartment building in the Marina District in San Francisco is ripped off on Oct. 21 1989 after a quake erupted 17 October, killing an estimated 273 people and doing USD 1 billion-worth of damage. (JONATHAN NOUROK/AFP/Getty Images)
US News

California at Risk of Mega-Earthquake, Catastrophe Could Kill up to 1,800

A giant earthquake could ravage California, scientists say, collapsing up to 900 buildings, triggering fires that could burn hundreds of city blocks, cutting off power for days, and devastating major transportation arteries.

Tremors shook Mexico last week during the most powerful earthquake the country had seen in a century. California is similar to Mexico in terms of seismic activity, so Mexico’s quake is an alarming reminder that larger earthquakes do happen, Los Angeles Times reported.

Mexico’s earthquake last week was measured as an 8.1 magnitude temblor by the U.S. Geological Survey (USGS). That’s four times the energy of a 1906 earthquake in San Francisco that killed 3,000 people and led to a fire that left the city scorched.

A quake on the scale of what Mexico experienced last week could wreak huge havoc on the state. The damage would be worse than what was seen in Mexico, scientists say, because Mexico’s quake occurred far away from populated areas, while a quake in southern California would run along a fault line directly underneath residential neighborhoods like the Palm Springs, San Bernardino Valley, and the San Gabriel Mountains north of Los Angeles.

Most of the population in Mexico was “a pretty long way away from [the earthquake],” seismologist Lucy Jones said Friday.

Meanwhile, in California, “we’d have a lot of people right on top of it. It would be shallow, and it runs through our backyard,” Jones added.

As a result, an 8.2 magnitude earthquake along the San Andreas fault would damage every city in southern California, according to Jones.

Such a quake could be extremely deadly, killing an estimated 1,800, similar to the number of people who perished as a result of Hurricane Katrina, according to a report by USGS.

Titled “ShakeOut”, the report gives fatality and destruction estimates for a 7.8 magnitude earthquake, which can be used to forecast the damage from an 8.2 mega-quake.

Fires could claim more than 900 lives, the report states, meanwhile more than 400 could die in the collapse of vulnerable steel-frame buildings. An estimated 250 could die from other building damage and 150 could perish from transportation accidents, the report estimates.

Major freeways would be destroyed by the shaking, with some being sliced in half, and the resulting parts moving up to 15 feet away from each other.

“Those freeways cross the fault, and when the fault moves, they will be destroyed, period,” Jones said. “To be that earthquake, it has to move that fault, and it has to break those roads.”

In similar fashion, aqueducts that bring most of the drinking water into Los Angeles would be destroyed as well.

In total, up to a million people would be displaced from their homes.