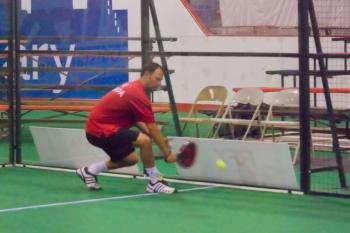 The Brazil–Mexico match filled the Calgary West Soccer Centre with cheers of “Vamos!” and provided a couple of tense moments as both the men’s and women’s teams for both countries gathered to watch the battle.

In match 2, with Brazil up 1–0, Mexico’s Aranzazu Gallardo  and Ximena Suinaga took the first set 7–6 against Brazil’s Laura and Mariana Altmayer, but the Altmayer’s battled back, winning each of the next two sets 6–2 to clench the victory.

The Canadian men’s team faced off against Switzerland after winning a lucky draw in a group that features two of the world’s top teams in Mexico and Brazil.

In a long and hard first match, Canada’s Dan and Cory Shannon faced off against Switzerland’s Rico Jacober and Stefa Kyburz in three frames which went 7–6, 4–6, 6–4 in favor of the Canadians.

“We had a very tough first match and went three sets,” said Canadian team captain Steve Shannon. “That calmed the nerves and we put out number one team out in the second match and that basically clinched it for us. We’re very happy.”

Canada’s number one line Gerry Martinez and Andreas Stamile crushed the Swiss team of Rico Jacober and Stefa Kyburz 6–1, 6–1 clinching the victory for the men’s team. Canada won the match with a score of 3–0.

Team Captain Shannon remarked that the team felt good in their match.
“We’re feeling good. The last two or three months we went through some trials to figure out the team. We had about 18 people try out and narrowed it down to seven. We feel pretty good about the way it’s going right now.”

Team USA faced off against the top ranked Brazilian squad and lost their match 3–0, but team captain Mike May of Houston wasn’t concerned. “For us the match against Brazil was more of a learning experience. They’re one of the top teams and we weren’t really expecting to beat them.”

May added that the team felt they had good prospects looking forward and are expecting to finish in the top eight and are aiming for the top five.
Day two on Tuesday will feature Brazil and Portugal facing off in both men’s and women’s match play. Canada will play the feared Spanish squad while Team USA has the day off.