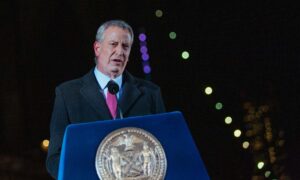 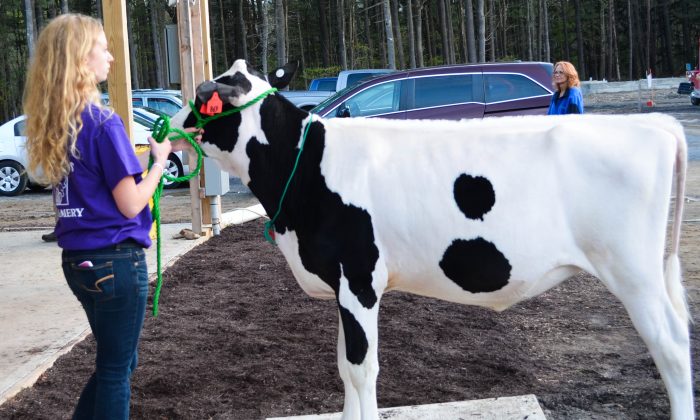 4H calf sale at the Education Center and 4H Park in Otisville on May 7, 2016. (Yvonne Marcotte/Epoch Times)
New York

Many breeds represented in the sale
By Yvonne Marcotte

Attended by about 250 farmers and 4-H supporters, the May 7 event showcased 25 calves for sale. Some would go to 4-H members, who either live on a farm or board an animal on the premises, or to farmers to raise as milk cows.

Many breeds were represented this year, according to Vanessa Merrill, coordinator of the Cooperative’s 4-H dairy program—Ayrshire, Brown Swiss, Milking Shorthorn, Guernsey, Holstein, and Jersey.

4-H member Aiden Kelley was hoping for a Jersey to raise and show. His family farm in Montgomery has started with Milking Shorthorns and he wanted a Jersey to “change it up,” he said “Their milk goes really good with Shorthorn milk. It’s a good mix.”

4-H members, distinctive in purple T-shirts, were everywhere in the barns helping with the auction. Teddy Matthews, 14, tended to the calves. “I am here to help clean them up and get them ready to be shown at auction. It’s really fun.” She raises a calf that she boards with a local farmer.

“We have animals that are for showing and projects animals for kids to work with and show,” said Merrill.

I got a lot out of 4-H when I was younger.
— Phillip Johnson, owner Fort Hill Farm in Goshen

Merrill said the proceeds of the sale, which each year averages between $3,000 and $8,000, covers expenses for the entire year. “None of the dairy kids have to pay for the trips we go on or the programs that we do,” she said

Donations made the auction a success. Owner of Fort Hill Farm in Goshen, Phillip Johnson donated a Holstein that he said he hoped would bring a good price. “We got a big project going on here so we thought we would do our part. I got a lot out of 4-H when I was younger. It’s kind of sentimental for me,” he said.

Johnson has donated calves four or five times to the sale in the last ten years.

“I expect to sell these animals at a more than fair-market price and hopefully raise money for the 4-H,” Joe said.

Tyler did the auctioneering while his father and another spotter pointed out bidders who placed a bid. Joe says his auction hall has supported the calf sale for many years. “Good things always bring good money,” he said.

The evening also had a silent auction of things like flowers, blankets, toys from agriculture businesses, and other local companies in the county.

Executive Director of the Cornell Orange County Extension, Lucy Joyce, said the sale was in its 21st year. Besides the trips taken by 4-Hers, surpluses from sales in the past will be used for the construction of the barn in the 4-H Park.

Important to the Economy

Merrill said dairy is an important agricultural part of the economy of Orange County. There are now about 30 dairy farms still operating in the county. “We need agriculture in order to live and survive. My goal is to encourage kids to get into it and see what they can do as a career,” she said.

The 4-H dairy program has 34 members that range in age from 5 to 18, both farm and non-farm kids who raise calves. Merrill said they get to “adopt” a calf and are expected to take care of it, raise it, and get it ready to show.

She said two members are currently in the program and are “loving it.”

Kieran McCarthy and Julie Goldsmith led the calves to the ring and showed them to bidders. McCarthy earned the honor with many achievements. He won reserve master showman for the dairy show last year. He participates in the state’s Jr. Dairy Leaders program and will attend the World Dairy Expo.

Merrill says McCarthy sets the pace for younger 4-Hers. “He is at the point in our 4-H program where he gets to be at the top. That’s what we want our kids to excel for.”

McCarthy plans to study dairy management at SUNY College of Agriculture and Technology in Cobleskill, “then I hope to start up my own farm in a niche market, either goat milk and cheese, or raw milk dairy cows,” he said.

I’d like to stay on the farm, but unless we can figure out an angle, a niche, that we can keep our business going, it’s going to be tough to compete with the big farmers.
— Phillip Johnson, son of Fort Hill dairy farm owner Phillip Johnson

The younger Phillip Johnson hopes to take over his family farm, but it’s hard to make a living on it today. He says it’s an economy of scale. When his dad was a young man, a 50-cow farm was a big farm. Today he said there are 5,000 and 10,000 cow farms in New York.

“I’d like to stay on the farm but, unless we can figure out an angle, a niche, that we can keep our business going, it’s going to be tough to compete with the big farmers,” he said.