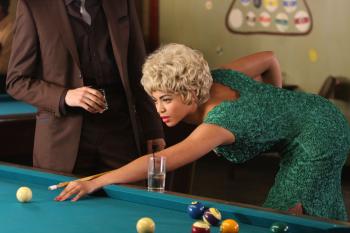 Record collectors develop a peculiar love for particular record labels. Blues collectors who love barely audible 78s venerate the Paramount Records of the 1920s. Those preferring a slightly more modern sound probably have a lot of Chess Records in their collection.

Founded by Brothers Leonard and Phil Chess, the label documented the evolution of the blues into Rock & Roll, recording iconic artists like Muddy Waters, Howlin’ Wolf, Etta James, Bo Diddley, and Chuck Berry. Now the label that gave the Rolling Stones their name and made the address 2120 S. Michigan world-famous gets the big-screen treatment in director Darnell Martin’s “Cadillac Records,” which opens wide this weekend.

As we meet young Leonard Chess, a working-class Jewish immigrant from the then-Polish township of Motal, his courtship of a girl from a respectable family is broken-up by her disapproving father. Though painful, it fuels Chess’s entrepreneurial drive. Drawn to Chicago’s African-American community, Chess first started out in the club business, but he soon finds his calling as an independent record mogul.

Cadillac’s strongest scenes introduce the Chess roster of artists as they are signed to fledgling label, with a series of musical numbers. Produced by Steve Jordan, a veteran of the Letterman Show and Sonny Rollins bands, the performances are somewhat modernized for popcorn audiences, but they still have some of the spirit of the originals. At least one Chess veteran lends his talents to the original soundtrack recording: Hubert Sumlin, Howlin’ Wolf’s longtime lead guitarist, who also briefly appears as a minor character in the film. On several tracks he is joined by guitarist Eddie Taylor, Jr., the son of Taylor, Sr., who appeared on some Chess sessions, backing up Sonny Boy Williamson II.

We hear from Eamonn Walker as Howlin’ Wolf and Beyonce’s Etta James, but if there is one artist who is synonymous with Chess, it would be McKinley Morganfield, a.k.a. Muddy Waters. Cadillac wisely focuses on him as the primary counter-weight to Chess, showing his early plantation years, celebrated Alan Lomax field recordings, and his eventual domination of the Chicago Blues scene. Although Jeffrey Wright is a totally different body type than Waters, he really captures the blues legend’s cadences and personality.

Believe it or not, Beyonce is also surprisingly effective as James, doing credibly well with classics like “At Last.” As Chuck Berry, Mos Def hits a perfectly manic note, and Cedric the Entertainer is a spot-on (but under-utilized) Willie Dixon. However, if you have read several books on Chess Records (as I have), you might find Adrien Brody distractingly miscast as Chess. Essentially a Willie Loman who made good, Chess died at a decidedly middle-aged 52, yet Brody plays him like a sad-eyed, sensitive thirty-something.

Record geeks (again, like me) will also take issue with other simplifications and alterations to the historical record. Chess really was a family business, run jointly by the brothers. Leonard’s son Marshall was also constant presence, working in nearly every department of the company. However, Cadillac shunts Phil Chess to the margins and ignores the junior Chess completely. To its credit though, Cadillac deftly handles the controversies surrounding the Chesses. While showing their rather informal royalty accounting process, the film also conveys Leonard Chess’s devotion to his artists, particularly James (but the supposed romantic interest between them has never been documented in any account of Chess I have read).

While Cadillac’s dramatic scenes are reasonably diverting, if not overly ambitious, the film’s real attraction is its music. On their strength, it qualifies as the most entertaining movie musical of the year, so far. It would also be a happy development if the film ultimately increases audience awareness of the label’s great blues and r&b artists. It opens tomorrow at a theater near you.

Joe Bendel blogs on jazz and cultural issues at http://jbspins.blogspot.com , and coordinated the Jazz Foundation of America’s instrument donation campaign for musicians displaced by Hurricane Katrina.