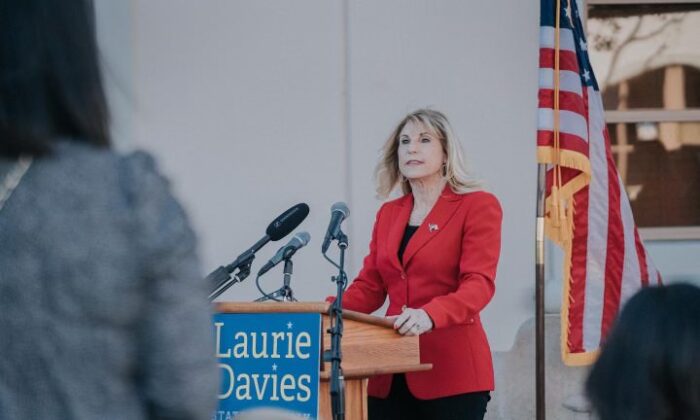 Davies, who has passed six bipartisan bills in the state assembly, unveiled the “California Parents’ Bill of Rights” to a crowd of parents, children, and other bystanders.

“During these last two years, Sacramento politicians have ignored the needs of our children and have used our kids as a political pawn,” Davies said. “As a result, our children are suffering.”

The “Parents’ Bill of Rights” would get the state to recognize and strengthen certain parental rights already in existing laws, making it easier for parents to have control over their children’s education and medical care, including what kind of religious and moral training their children should have, which school to attend, what to be taught, whether to get vaccinated or not, and whether to mask up in school or not.

“We don’t feel any child should be constrained by their zip code, and we know that parents always make the best decisions for their children, not the districts,” Mari Barke, Orange County Board of Education president, said during the press conference in support of the bill.

In terms of curriculum, the bill would require schools to provide more opportunities for parents to sit in on classes and inform them about what is going to be taught and how to legally opt their children out of sex education.

The matter of what’s being taught to students has become increasingly controversial since the beginning of Gov. Gavin Newsom’s “stay-at-home” orders back in March 2020, as remote learning allows parents to see more of what their children have been learning.

Lisa Davis, a trustee for the Capistrano Unified School District, said “a small silver lining” over the past two years of the pandemic has been parents awakening to what’s happening in education and the detrimental effects some elements have caused on children.

“We have to be vigilant as parents and community members in being aware of what’s happening and call out things that are not right,” Davis said.

To keep parents better informed, the legislation would also require schools to post information on how to participate in teacher associations, access statewide standardized tests results, and learn about educational requirements students have to fulfill, as well as how to qualify for special education programs.

Some parents also had enough of the COVID-19 measures—such as masking and online learning—imposed on students, which they said did more harm than good to their children.

“For me, the masks were the hill [to die on],” Kristy von Waldburg, a mother of two from Laguna Niguel, told The Epoch Times. “But now more and more people are seeing the writing on the wall, and we’re getting involved.”

A couple of hours before showing up to the press conference, three students from a local high school were kicked out of their classrooms for refusing to wear a mask.

One student told The Epoch Times approximately 20 students were forced out of their classrooms, denied by their teachers when they asked for the day’s assignments, and sent home by the school’s administrative office.

“They said if we weren’t going to be in class on campus, then we couldn’t be on campus,” Julianna, a freshman, told The Epoch Times.

This incident is a part of a recent wave of student protests against the mask mandate across the state after Gov. Newsom and other state officials were caught maskless two weeks ago during the National Football Conference (NFC) Championship game at SoFi Stadium in Inglewood.

Davies’s bill, AB 1785, could face great challenges in California’s legislature, where the Democrats have a supermajority.

However, Davies said the pressure is on them as parents are raising their voices over concerns of the state’s executive power and emergency orders that have directly impacted their children’s education since the beginning of the COVID-19 pandemic.

“It’s election year,” Davies told The Epoch Times. “They’re going to have to actually be accountable for what [legislation] they pass and what they don’t pass.”